PANJIM: Insight Development Consulting Group (IDCG), a leading research and strategy consulting firm, enabling communities, institutions to develop high value solutions, has released the findings of its study on ‘The Economic and Environmental Impact of Diesel Gensets (DG) used by commercial and industrial units in Goa.

The study observed that 87 per cent of Goa’s businesses face power outages every day and over 45 per cent out of them are to a large extent dependent on expensive and polluting, diesel generator sets.

The research further highlighted the financial impact on the consumers due to DG set usage. Hotels and industries that are required to work 24x7, are the worst affected. Large hotels, on an average, lose Rs 35,000 every hour they work on DG sets as hospitality sector pays up to 16 times more for diesel-based power as compared to power from the grid. Industries pay 5 to 10 times more, whereas educational institutes spend 10 times the cost of power from the grid for each hour they rely on diesel-based power. This significantly reduces profitability and competitiveness of Goan businesses impacting their ability to investment more in the state and elsewhere.

Goa’s over dependence on diesel-based power has also emerged as a threat to the environment. Businesses in the state emit 1.80 million tonnes of CO2 annually by using DG sets, which is equivalent to the amount of CO2 absorbed by 86 million trees in a year. The study highlights that the state needs to provide its commercial and industrial establishments reliable power supply by upgrading its power transmission and distribution infrastructure, to limit its CO2 emissions.

Commenting on the findings of the study, Aneesh Vijayan, director, IDCG, said, “Through this study, it is evident that the state of Goa faces significant economic and environmental impact due to its reliance on the diesel gen-sets, which is one of the main sources of environmental pollution. We are positive that the findings of the study will be of immense value to the Government of Goa in building policies that will reduce the state’s dependency on DG sets.”

Goa’s per capita diesel consumption in 2018 was three and a half times higher than the national average. To assess the economic and environmental impact of diesel gen-sets usage by industrial and commercial establishments, IDCG conducted a primary research in the state and visited establishments across different categories of consumers such as hotels, restaurants, Govt Offices, Hospitals, and Large and Small/ Medium Industries.

The key finding of the report says (a) 100% large industries and 75% medium and small industries are greatly dependent on gen-sets to meet their power requirement. (b) 7 out of 8 Goan businesses face outages everyday. More than 45% of them rely largely on diesel gen-sets. (c) 100% industrial units and hotels use or more captive power units including diesel/petrol gen-set. Hotels and industries meet up to 13% of their electricity demand through diesel gen-sets. (d) Hotels and industries pay 5 to 16 times more each hour they switch to diesel-based power when compared to expenditure on grid electricity and (e) Diesel generators in Goa emit 1.80 million tonnes of CO2. About 86 million trees would be required to absorb the CO2 in a year.

IDCG believes that if the government does not take adequate steps to address the gap in availability of reliable grid power at the earliest, enhanced power demand by 2030 will only increase reliance on DG sets, resulting in further deterioration in Goan business competitiveness and environment. 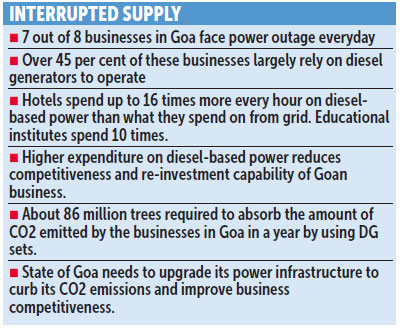