Industry captains in Goa are feeling let down as the state has slipped down in all India ranking of Ease of Doing Business. The call from industry leaders is for the State government to be more transparent and engage with the industry as partners in progress. VIKANT SAHAY speaks with stakeholders to find out more 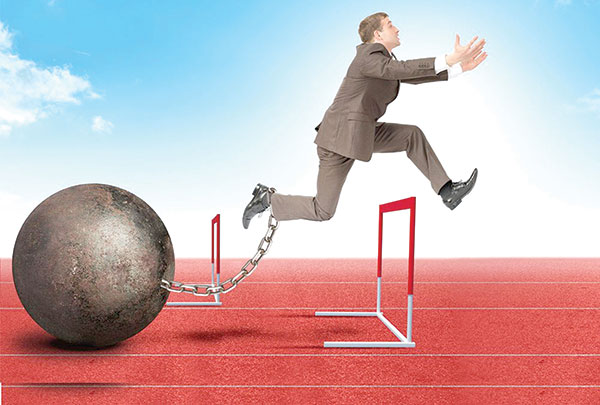 oa’s slide in the all-India ranking of Ease of Doing Business (EoDB) from 19th position to 24th has aggravated the already sore industry leaders.

All India president of Manufacturing Association of Information Technology (MAIT) and past president of Goa Chamber of Commerce and Industry (GCCI), Nitin Kunkolienker believes that EoDB plays a major role in bringing investment into the State. Only those states which have good EoDB have been able to attract qualitative investments.

“We have got a young, well-intended and dynamic Chief Minister. He needs to take leadership on EoDB which will not only help business in Goa but also help the government to create a new image about Goa. We understand each state has different geo-political systems in place and mapping everyone in one common system is difficult. In Goa there is a challenge and we need to work on this. The Chief Minister should take the lead and drive it from the front. Government has to relook at legacy legal provisions in terms of its suitability in modern times especially in an era when many things could be dealt with in a much easier manner through electronic processes. While process reforms are critical at this junction, Government should revoke arbitrary circulars issued in various departments directing referral of files to political bosses. Also, e-governance process alongwith integration of data and data sharing across departments should be implemented. This will create immense ease and also help to reduce corruption. This will also reduce unnecessary burden on the government officials and relieve them for work stress which they undergo due to non-clarity of processes. Overall both businesses and officials would gain out of this and it will further benefit the state,” said Kunkoleinker.

The fact that Goa has done well in having policies and system in place but have gone down on an overall basis, indicates that implementation is lacking. It indicates that the government leaders have not been able to push the departments enough.

“It requires focus. Though capable, I understand Industries minister has not been able to give enough time to Industries due to pre-occupation with the Health portfolio. Since COVID-19 is here to stay for longer than anticipated, Health and Industry portfolios need to be delinked,” suggested Rajkumar Kamat, president, Vibrant Goa.

He went on to add that there are two critical departments related to industries – the Investment Promotion Board (IPB) and Goa Industries Development Corporation (GIDC). The CEO IPB and chairman and MD of GIDC should be full time posts without additional charges and with clear goals.

“We do not require more task forces or consultants. We need sensitive and solution oriented people focused on the goals, to be at the helm of affairs. We should also have in place an effective grievance mechanism to offer solutions and ensure accountability at department levels. This should be monitored by the Chief Minister’s Office on a daily basis. The Chief Minister has taken perfect decisions on both life and livelihood front including locking and unlocking at the right time. But in terms of implementation the focus has been more on health. It is important that he focuses on industries and drives the Ease of Doing Business,” said Kamat.

Former president of the Goa Chambers of Commerce and Industries (GCCI) Sandip Bhandare felt disappointed with Goa’s performance in the EoDB rankings. “This is particularly so because the last time we had seen a massive jump in Goa’s EoDB rankings. The main reason for the slippage is the tweaking of the ranking methodology, whereby the feedback received from industry stakeholders has been given a prime place in deciding the rankings. The ground reality is still there is unavailability of land in the public domain for starting an industry,” said Bhandare.

He suggested that one may try to digitize the operations, without the availability of land, power and water, it is very difficult for new industries to set up base in Goa. Additionally, the planned single window mechanism of granting clearances has still to achieve its efficacy. Further while the government has concentrated at the front-end digitisation, it has still to achieve the back-end coordination of all the agencies required to give clearances for setting up a new industry or expanding an existing industry.

“The mining ban coupled with the COVID-19 affected tourism and manufacturing industry has placed Goa’s economy at a very delicate stage.  This is also a wakeup call for us. We need to single mindedly concentrate on improving the infrastructure and speed up the decision-making process. There has to be vision as to where one would like to see Goa’s industrial scenario in the next 5 to 10 years, and there has to be a clear roadmap to achieve that vision. Finally, the key to success lies solely in the swift execution of policy decisions,” added Bhandare.

President of the GCCI Manoj Caculo feels that EoDB is not just about creating a regulatory framework. It is a means of creating a robust business-friendly ecosystem that supports diverse enterprises to conduct their business in a smooth and seamless manner across the spectrum of sectors.

“We have made some progress by implementing about 167 of 187 BRAPs, but that in itself is not sufficient. We have to implement these reforms in letter and spirit and more importantly do it genuinely. This requires a huge change in mindset and attitude, otherwise all the reforms will remain only on paper. Also the entire government machinery has to take it upon themselves to show interest rather than do it as a mundane duty. I feel that it’s time government considers industry as its genuine partner in the State's progress and consults industry stakeholders on all major issues impacting business. This is the only way to show progress,” said ManojCaculo.

President of the Goa State Industries Association (GSIA) Damodar Kochkar stressed that that to improve EoDB rankings for Goa, nothing but willingness is needed.

“Everyone knows what needs to be done. There are so many bright Goan entrepreneurs and business leaders who understand what is good for Goa and what is not. But the people who are in power have neither intentions nor willingness to improve the situation. It is very simple if everything is made simple, transparent and easy for industries then how do they get importance for themselves and how do they make money. If Chief Minister says he is ready to change the situation than I offer my time and energy but the intentions must be clear and clean,” said Kochkar.

Assistant Professor in Economics from Goa Institute of Management Dr Joy Chowdhury made it clear by saying that DPIIT, Ministry of Commerce and Industry has laid down the BRAP 2019 consisting 80 recommendations for the improvement in EoDB index.

“Though Goa is leading in per capita GSDP ranking, there is a scope of improvement in EoDB ranking, which will increase the state revenue and hence will be helpful in reducing debt to GSDP ratio for the state. There is a growing need of eliminating the physical contacts during the submission and verification of documents. Single window system and shifting towards online mode are important factors in improving EODB index. Government needs to improve the existing single window system to facilitate the investors,” believes Chowdhury. 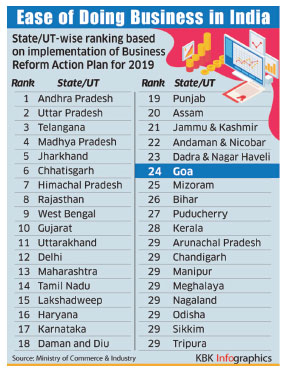