‘Cartoos of the Gurkhas’

Soldiers are warriors. But they too have emotions, which needs to be expressed, believes the fearless son of Goa, ‘Cartoos Saab’ Major General (Retd.) Ian Cardozo, who has chronicled his experienes as an army officer in his book ‘Cartoos Saab: A Soldier’s Story of Resilience in Adversity’, which was launched at the ongoing GALF 2023 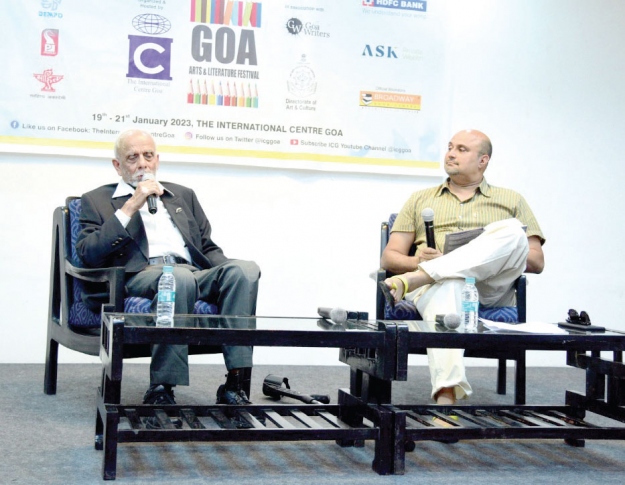 A soldier might retire from his tenure, but the military blood never dies. Major General (Retd) Ian Cardozo a well known military hero of Goa, who amputated his leg using a khukri in the 1971 Indo-Pakistani War. The Goan braveheart who served in the army for three decades, has penned down his experiences about war in his book, ‘Cartoos Saab’. It takes the readers through his journey as a soldier, making them feel and live his war experiences. Maj Gen Cardozo took the centrestage at GALF (Goa Arts and Literary Festival) 2023 to speak about his book, which tells the story of a young boy who becomes an officer in the Indian army, the challenges he experienced and how he handled himself after losing a leg in the battle.

Ian Cardozo is also the recipient of military honours for his distinguished service - the Ati Vishisht Seva Medal (AVSM) and Sena Medal (SM).

He is known as the first war-disabled officer of the Indian Army to command a battalion and a Brigade. The General brought up his childhood memories by describing his school life when his father encouraged him to play sports and read stories about the wars. He said, his father wanted him to join the Indian Army, and after completing his schooling, so Ian enrolled himself in the National Defence Academy (NDA). He was the first NDA cadet to earn both the silver and gold medals in the academy. After completing the course at NDA, he went to the Indian Military Academy (IMA).

He added, “Cartoos Saab is not just my story, it is about the military life, it’s about how we soldiers live our life. It’s all about the situations of my fellow military soldiers, and companions.” The author also narrated an incident where he was once injured and destroyed. He had to sit still in a medical room. That’s when he first wrote - The Unknown soldier. “I’ve never seen myself as a poet. Cause if you see the poets out there, they’ll be having the poems and the flow coming naturally to them, as if someone has been pouring all the emotions in the form of words. For me, it was really difficult to put my feelings in a poetic form”. He jokes about it, saying he wrote his first poem in about forty-five minutes. After ‘The Unknown Soldier’, it became comparatively easier for him to put down his feelings in a poetic verse. The poet then narrated ‘Beti’, which revolves around the women of these soldiers. These women are none other than the soldier’s mother, wife, sister, or lover. “You see them being all proud stating my son got martyred, or my husband sacrificed himself for the nation.” The general then pointed at his heart, “This is where the pain is being suppressed. This is exactly the battle of emotions, and the conflict, knowing you’ve lost someone precious to you, and burying it in pride”. He deeply honours the military women, by putting their feelings in this poem.

How do these soldiers know love, if they spend more than fifty percent of their life fighting on the border for our nation? General Cardozo beautifully answered this question by stating, “Army is all about love. It is the love for the country, the love for the soldiers, the love for the people of this nation, and the love for their battalion. This is the kind of love we soldiers have, and we express it by being there and protecting our nation, and fighting on the border for it.” According to his subordinates, the general is one of the most disciplined, kind-hearted, and perfectly organized people they have come across in their life. Describing one such incident, Manjeet Singh, one of his subordinates said “It was around January while we were in Jammu and Kashmir. I get a call from the general around two in the morning. The temperature is in negative degrees, and it was almost impossible to walk through the snow. The general ordered me to follow him.” He keeps on describing his nervous feelings as he follows the general till they reach the quarter. “He then opens a box full of sweets and fruits for us! That is how surprisingly kind he is.”

“To do what you love, to love what you do, to never be afraid, and to never give up.” is one of the best pieces of advice he’d like to share with everyone. Growing up Cardozo always thought his mother was one such inspiration for him. The fear of failure, the confusion, and the overwhelming feelings are very difficult for the youth to control. It’s like going to war and battling your emotions against yourself, where you either control them, or they take control, over you. Being a teenager is never easy. The conflict ranges from minor to major issues, and differs individually, generationally, and also based on personal experiences, and at times, gender. The best piece of advice the general has given referring to his mother’s teachings is,-“Do what is right. Irrespective of its consequences.”

The general has previously participated in the 2019 Mumbai Marathon with 16 other war-disabled army men and hence is also a marathon runner. Being the gentleman he is, he also fondly talked about his family and his beloved wife. The general also had his concluding quote for the event. He said “Wars are caused by the politicians. Compounded by the bureaucrats, and fought by the soldiers.” Words are the only weapons that can fight a soldier’s emotions. Hence, the stories of each army personnel, are not just stories penned down about their war experiences and perspectives, it’s the medium of expression of their emotions and feelings.