A Goan sings notes of unity & the World listens 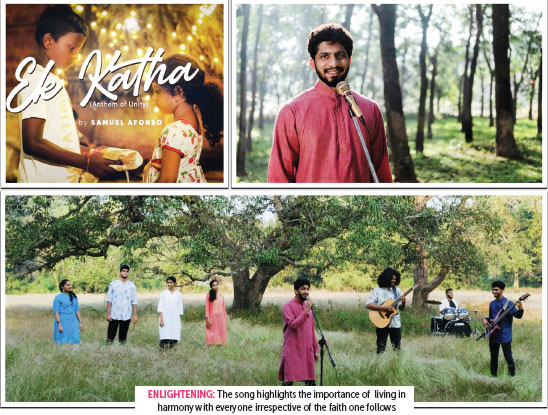 In these times when individuals and organisations are working on creating communal discord, there are individuals keen on highlighting the importance of living together in harmony. This is the festival season, the time when everyone comes together to celebrate and enjoy in each other’s happiness. A budding musician, Samuel Afonso who is presently doing his M Sc in Environmental science in Pune has written a song in Konkani that has caught the fancy of people all the world. Ek Katha tells the story of a young girl who suffers an injury and is now in hospital and importantly for her whose parents are too poor to buy her anything for Diwali. One of the children in the neighbourhood overhears a conversation between the parents and decides to ensure the little girl has a good time when she returns home. He organises the children in the neighbourhood to clean the house and decorate it and more importantly give her a little gift when she returns home. Samuel said “The main idea is the importance of unity, which ever community we are, we should be together. We have to treat each other with love and respect. This should be our credo for life.” He said everyone seemed focused on singing love songs but he wanted to bring something different to the songs that highlighted unity. He said “I wanted great music, a high standard and a strong concept. People spend a lot of time and money on love songs and I thought it was important to do this while singing songs of unity”. Always interested in music, he has completed the fifth grade on the violin. He is also a graduate in geology.  This song in Konkani he said was a surprise because he spends time listening to western classical music, slow rock and funk. The motivation to sing this song came from a person who was impressed by his singing of a hymn. He suggested Samuel come up with a song on Diwali about helping each other. In time he composed a song, gathered the musicians and recorded it.  Through team effort the song was recorded, shot and edited in a span of 15 days. The video features singers like Myriam Fernandes, Jocelyn Godinho, Allson Dias and the children of Zorivaddo Gudi Paroda. The lyrics are written by Samuel Aaron Afonso and Zinho Fernandes.  The music was directed by Zinho Fernandes. Musicians like Desmond on keyboard, Sid Gomes on drums, Cyrus Fernandes on bass, Karen Coelho on violin) and Zinho Fernandes on guitar helped. The song is attracting attention in various countries thanks to the digital platforms on which the song is uploaded. Samuel's belief that unity is strength came into reality, when he saw the efforts of his teammates.One can only hope, his message will catch on and sweep away the negative forces that seem to be fighting for attention.