A senior Goan advocate and social scientist Shanti Fonseca has criticised the illegal detention of 83 year old Fr Stan LourdSwamy and has bemoaned the manner in which he was arrested and then detained allegedly over a 2018 caste based biolence case, in conditions that were appalling to put it rather mildly.Adv Fonseca has known activist and Jesuit Fr Stan Swamy 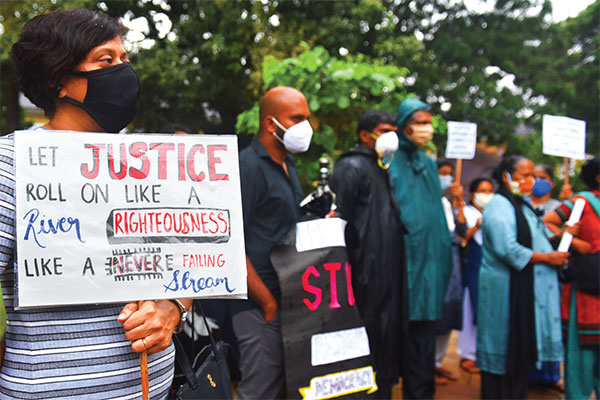 Adv Shanti Fonseca is a former student of the detainee in 1980 when he was the Director of the Indian Social institute and she did a course in social change.  Speaking to the Café she said “I would like to know why he was nabbed in the early hours of the morning as if he was an absconding terrorist by the NIA on Oct 8. He was produced on Oct 9 at a special court in Mumbai. It is an illegal detention because Stan Swamy never refused interrogation and was always cooperative with respective authorities”.
A member of the Jesuit order from Jamshedpur province, she said two days before his arrest he was being pressurized to come to Mumbai for further interrogation. He had refused primarily on grounds of his old age, poor health and also because he had already spent fifteen hours of interrogation with the NIA. He however, Shanti said was willing for be further interrogated through video conferencing.  The state of Jharkhand had given a call to senior citizens to not move out of the house or the state. The lifting of Swamy arbitrarily in the stillness of the night was handled illegally by the country premier intelligence agency.
Shanti said he was the oldest person to be charged under the unlawful activities prevention act. The jail he is being lodged in is the Taloja Central jail in Kharghar which has 3000 inmates and is overcrowded without proper toilets. Worryingly, Shanti pointed out there were plenty of Covid 19 cases in the staff and inmates. The police had remained silent and were not answering answered any queries; in short she said they had washed their hands.
Shanti said when produced in court, the NIA never asked for custody and neither did anyone else. In such a circumstance, it would have been justice for the judge to release him. However Shanti said the fear of losing her chair prevented her from doing it. She sent him to two weeks judicial custody.
Shanti said “Everyone knows that an accused is sent to judicial custody because there is no further interrogation necessary and investigations are over. If Stan Swamy was required for any further interrogation as alleged by the national intelligence agency then he should have been placed under police custody. Injustice has been done to an 83 yr old who has been suffering from Parkinson’s for 4 decade and other severe medical problems. Hope better sense prevails and he is released from this illegal detention on Oct 23 when he will be produced before the special court once again”.
She lauded the CM of Kerala for his solidarity with Stan and his statement that this detention was a move to muzzle dissenting voices against the principles of the constitution.
The priest has been in with Fonseca's family and even came to visit her when there was a personal tragedy.
Related news