The online version of Difficult Dialogues concluded with great deal of discussion held on the environment and the importance of sustaining it. 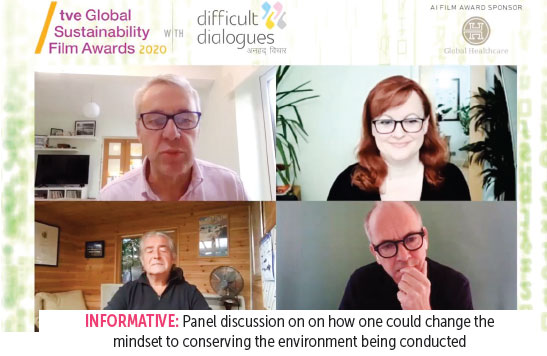 One of the more interesting events in Goa held every year involves discussing subjects some may feel squeamish to do. Difficult Dialogues has been held in Goa for five years in February but this year thanks to the virus, it was held online this week. Every year themes are selected and this year, the environment was selected as a topic to be discussed and debated at great length. In the  run up to the event a panel discussion was held featuring environmentalists and the then MD and CEO of Imagine Panaji Smart City  Swayan Chaudhury . The subject was if it was possible to have conservation and development together and in the light of projects like Mollem which had excited local spirits, it was a timely subject. The panellist concluded that it was possible for the government and the environmentalists to talk in a polite manner and it had to be done so that a path ahead could be found. This year in a first the Global sustainability awards were combined with Difficult Dialogues.  The online awards presentation was complemented by four thought provoking Difficult Dialogues panel discussions on crucial themes related to global sustainability as well as the finale of the Daring Debates, a debate competition aimed at engaging youth from across the world in sustainability related ideation. The  GSFA which is in its ninth year and rewards films both on their creativity as well as on the sustainability impact, received over a hundred film submissions from 17 countries. A diverse and eminent international jury panel drawn from the fields of sustainability and filmmaking, adjudicated on the entries to first come up with three or four shortlisted films for each category and then announced the final winners. The inspiring five day long online event presented by Difficult Dialogues in partnership with the tve GSFA was focused on Global Sustainability, a key theme that crucially affects the entire planet. It was well attended by sustainability experts, filmmakers, businesses, not for profit organizations, youth leaders and individuals concerned about sustainability. The agenda was to highlight the current environmental crisis and suggest solutions and actions we need to take today to ensure a better and more sustainable future. This was done through dialogues, debates and films, with about two hours of environment and sustainability content each day. Commenting at the conclusion of the Awards Week, Surina Narula, MBE, Founder of Difficult Dialogues and the  tve GSFA said, “The last week has been a roller coaster ride showcasing the collection of shortlisted and winning films and incisive discussions on developing a more sustainable world including difficult dialogues with businesses because of the dilemma of profit over sustainability. This year going virtual over five days gave us more time to provide a better experience for filmmakers and the visibility to showcase our youth ambassadors and their work.” The five day event concluded with the announcement of the winners of Daring Debates which featured the college finalists from India, Nepal, Myanmar, Bangladesh, Africa, USA and Sri Lanka who debated the topic – Is Global Sustainability Profitable for Business? At the end of a keenly contested finale, Gloria Oziohu Alonge from University of Lagos, Nigeria, Africa was declared as the winner for the motion while Aditya Dhar from Harvard University, United States of America won against the motion. There were four Difficult Dialogues panel discussions during the Awards Week which focused on relevant global themes related to Sustainability. The themes of the panel discussions were Changing the Mindset, Role of Innovation in Bringing about a Sustainable Future, What Will Our World Look Like in 2050 and Hidden Stories, Impact Journalism: Business and Politics of Global Sustainability. Key speakers included  Andrew Wilson, a change agent with expertise in sustainability and business purposes, Andrew Dunnett, Director of Vodafone Foundation, Tony Juniper, eminent campaigner, writer, sustainability adviser and environmentalist, David Stringer Lamarre, a business leader, entrepreneur and innovator, Duncan Wardle, who served as Head of Innovation and Creativity at Disney, Mark Wood, an established speaker, author and explorer, Adam Ricobanni, an AI entrepreneur and author, Claire Rewcastle Brown, British investigative journalist who has campaigned ceaselessly against environment destruction and Poulomi Basu, Indian transmedia artist, photographer and activist.