A lot of very good words 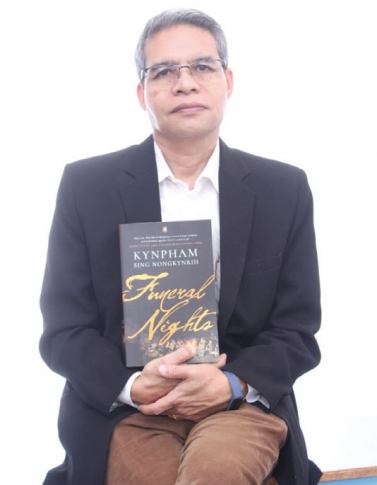 It has been likened to the bible and called as one for the Khasis. Kynpham Sing Nongkynriha poet and writer based in Shillong whose one thousand page opus called Funeral Nights was launched at GALF yesterday. This was a welcome relief for the author who was unable to launch the book earlier due to the Corona virus.

It is a story about a group of academics and writers from Shillong who are on a journey to a remote part of West Khasi Hills to witness ‘Ka Phor Sohrat’, the feast of the dead, a unique six-day-long funeral ceremony of the Lyngngams, a Khasi sub-tribe. They however end up reaching the secluded hamlet of Nongshyrkon seven days early. ‘Stuck in the jungle for eleven days, they spend their nights around a fire in the middle of a spacious hut built especially for them, sharing stories and debating issues in what turns out to be a journey of discovery for all of them.’ It has been called an unconventional novel blurring the lines of fiction and non fiction. The style has been inspired by the Arabian nights, funeral tradition of the Kahasis and even the Plato Socratic Dialogue.

He was inspired by V K Karthika of Harper Collins who heard him recite a poem called Those Days in Chera. He was told she saw a story in that line. Kynpham gave her a book that challenged various genres. The book he said was a huge vision of India, world, humanity and the supernatural.

The book is considered a success because it is now in its second edition. The first edition sold five thousand copies in six months. Like any good writer, he has already started work on his next novel called “The day of the banana” which he calls a tragic work of fiction. He has done some work editing the first ever English Haiku work coming out of India and negotiations are on for a book on short stories from the North east.