A magnet that draws musicians from far and wide

Goa is emerging as a destination for musicians from all over the world to come over. Many perform for a couple of months and leave and make plans to return and others just stay back 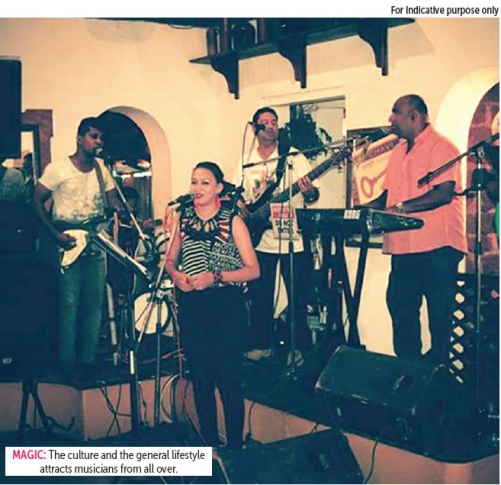 It is a fact that is not known outside of Goa that much. But for people in the know it is an accepted fact that Goa is a global music hub. It is not unusual to hear of big time musicians to have visited Goa, played in small bars and moved on. However now a large number of international musicians are playing in Goa, some stay here for a month or two and perform and others just stay back having fallen in love with the state.

Colin D Cruz, renowned bassist said many of them enjoyed performing in Goa. He said “They find Goa so good and end up staying over here. People are coming from so many countries because they like the atmosphere and the general culture. Many of them choose to leave their luxurious lifestyles back home to enjoy the simple ‘susegaad’ lifestyle that Goa is known for”. He said that if a census was done, Goa could emerge as a place with the most live music venues in the world. Hence he argued it was no wonder why so many musicians from all over the world choose to make Goa their second home, some of them even setting up home permanently in Goa.

Alexis from Zimbabwe who has Goan roots said the atmosphere was just great in Goa. She said “My grandfather was Goan. He was born in Panjim and baptized in Raya. The weather is great and the music keeps me alive. Music is something that I have had with me since childhood. The music keeps me alive. I love it here; this is the land of my forefathers.”

Another long time resident in Goa is Jan Graveson, a professional actor, singer and performer from England. Having performed in Broadway, Westend and acted in serials like Eastenders, she was trained to sing in a certain fashion. She said “When I came to Goa, I could sing the way I always wanted to. The freedom opened my soul. And yes there was a colorful mix of musicians and artists who are drawn to Goa. The opportunity to mix with artists from different countries and fuse cultures and styles of music is exciting. This is what draws people back every year. I am here permanently. I have my own performing arts school which is in Mumbai and Goa. I just love it here.”

Bob Tinker is another regular visitor. He said “ Shirley and I first visited Goa in 2008 when we met Colin d’Cruz who was playing bass at the Jazz Corner in Candolim with Lester and a guitarist. I am a trumpeter who joined them and played a few numbers on a trumpet borrowed from a local shop. We started going to Goa every year during January and February and built up a rapport with many other musicians in North Goa playing concerts, weddings, jazz clubs and private functions. Shirley sometimes joined us on violin notably with Marina Xavier and also on concerts near Baga at a hotel run by Chris Diplock. Each year until 2018 we went to Goa and enjoyed playing jazz, blues and funk with many musicians and singers in many venues. We love Goa and it became our second home every winter. There are some superb musicians in Goa and we hope to return next year after an absence of three years. Long live Jazz Goa”.

Anyone interested in jazz in Goa has certainly heard of Julia Krachler who calls herself a singer, model and yoga teacher. Speaking about her experience in Goa, she said “ I am a jazz singer from Austria and have been living in India for the past 5 years, I moved to Goa 3 years ago from Delhi, here I felt at home because of the supportive music community and openness of local musicians kept me in Goa, the variety of great local and international artists sharing nothing more than passion for the same. The openness and freedom to express yourself and the culture of music has no boundaries between local and international musicians, music has no language, it brings them all together in harmony!”

Attempts to contact others proved futile. Colin said there were those who were performing without the requisite papers in order. He laughed and said some of them come here as tourists and take up gigs. He however said that there was no doubt that in the future even more musicians would come over once the pandemic had come to an end and musicians were able to come with all their papers in order.

One can only hope that becomes reality in the day ahead because Goa could certainly do with some world class entertainment.