A priest with a sense of drama in him 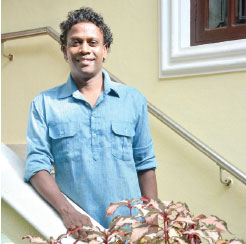 The pulpit is a sacred place from wherein the priest speaks the word of God for the faithful. The stage is a sacred platform whereby artistes enlighten the audience through entertainment.

Hailing from the picturesque island of Chorao, Fr Milagres Dias was born on June 2, 1979. He obtained his primary and secondary education in St Bartholomew High School, Chorao.

During Christmas programmes organized at the parish level, as teenager and youth, Fr Milagres would participate in cultural activities like singing and plays. “But my talent was still hidden or rather in the incubation period,” he revealed.

After graduating from St Xavier’s College, Mapusa, responding to God’s call, Fr Milagres joined the Seminary of Our Lady, Saligao for the orientation course, followed by philosophy and theology studies at the Rachol Seminary in south Goa. “At both the formation houses,” he shared, “there were ample opportunities to showcase hidden talents by way of compering at cultural programmes, singing in the choir, participating in one-act play competitions.”

“At the Rachol Seminary,” Fr Milagres mentioned, “my literary talents equally came to the fore, by contribution towards two bulletins, namely ‘Jivit’ and ‘Luceas’. It was a good opening towards creativity by penning poems and articles.”

After being ordained a diocesan priest on October 9, 2009, Fr Milagres was posted as an assistant parish priest along with Fr Joseph Rodrigues at the Grace Church, Margao. When Fr Rodrigues took the initiative to participate in the Kala Academy (KA)’s annual tiatr competition (‘B’ group) with his tiatr ‘Sopnantlem Sopon’, Fr Dias assisted him by penning songs.

“The idea behind introducing artistes only from his parish is precisely to tap raw talent and bring unity and brotherhood among the parishioners,” Fr Dias shares. “The parishioners get to know each other more intently, thus strengthening the bonds of a bigger family,” he adds.

Apart from penning and staging his own productions, Fr Dias enjoys watching commercial productions and tiatrs staged at various competitions. And when watching the role of a priest on stage, he finds it enacted often with artificial flavor. “Timely delivery of dialogues is important, besides posture and gesture. There are a few commercial artistes who have the knack of acting as a priest and they deserve appreciation,” he observes.

If given a choice to enact as a priest or a comedian, Fr Dias would definitely opt for the former as he has chosen it as his vocation. But he is equally comfortable in the shoes of a comedian and villain.

When it comes to penning songs, being a lover of nature, most of the lyrics revolve around environment and means to safeguard it, reveals Fr Dias. His songs also focus on human values, family life and satire, not forgetting to deliver a message or two at the end.

When asked to compare the pulpit and stage, Fr Dias said that he would not compare the two. “But as a minister of God,” he said that from the pulpit he would always enjoy breaking the word of God, which is his ministry. “Love for Konkani and the tiatr stage help producing new tiatrs, which draws the audience to stay more focused and involved in what is actually happening on the stage.”