Aiming for the stars

Multilingual film ‘WELCOME M1LL10NS’ that was filmed in Goa, Punjab, the United Kingdom and Los Angeles (USA) and whose title theme song was scored by popular Danish band Michael Learns to Rock, has been selected to contest for the Academy Awards. Café finds out more 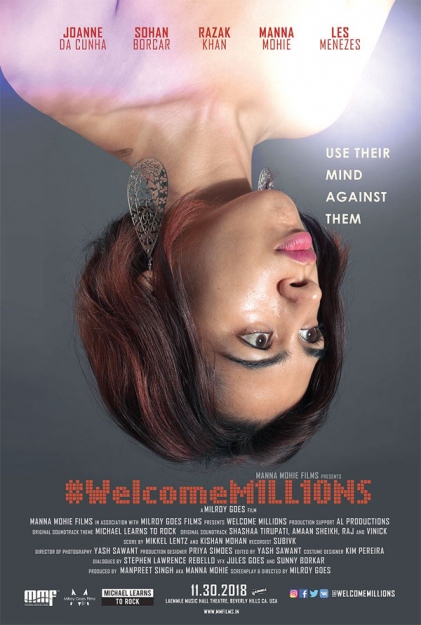 The film ‘WELCOME M1LL10NS’ has been selected to contest for the prestigious Oscars 2019 in the General Category. It will have its LA county screening at Laemmle Music Hall, Beverly Hills, California, USA on November 30, 2018. The film is being distributed by Double Exposure Distribution, Los Angeles.
Directed by Milroy Goes and produced by Manpreet Singh (popularly known as Manna Mohie) of the UK based Manna Mohie Films production company, the film is scored by Mikkel Lentz (Denmark) and Kishan Mohan (Kochi). The film’s title theme ‘Someday it’s gonna make sense’ is by Michael Learns To Rock, while the end-credit original sound track is by Shashaa Tirupati and Amaan Sheikh featuring Vinick, Raj Shinde (Rapper). It was the dream for the director to have a collaboration with Michael Learns To Rock, and producer Manpreet Singh loved the idea. The film features the very talented model-turned-actor Joanne Da Cunha as the main female lead and Sohan Borcar, noted for his short films, as the male lead. The film also features actor-producer Manna Mohie, talented Bollywood actorthe late Razak Khan in one of his last performances, Les Menezes and the famous Dylan Rodrigues. Making guest appearances are many well-known international actors including Jan Bostock and Kathryn Michelle, as well as famous Goan names include comedian Selvy. Inspired by true events, the film follows Alfred D’Souza, whose life turns upside down because of everyone’s fatal flaw, money, in the year before demonetisation took the whole of India by surprise. Living in a small town in Cuncolim, D’Souza is just your average Joe, consumed by his dreams of amassing riches. Instead, he finds himself caught up in a vicious lottery fraud. While the lackadaisical nature of the Indian cyber crime department leads to the closing of his case, things take an unexpected turn when a corrupt cop decides to reopen the case. What enfolds? Will the beautiful French lady Kuski Braganza take the case in a new direction? That’s for the world to see. Initial script development of the film started in 2014. The film has been filmed in Goa, Punjab, United Kingdom and Los Angeles (USA)and is a multilingual film, featuring languages like English, Konkani, etc. It took nearly two years to produce the film and post-production, which was done entirely in Goa, took almost eight months to complete. Production Designer Priya Simoes from Chinchinim recreated the Police Station and other sets and many significant props to bring authenticity to the film so that it remains in thepast era as much as possible, as the film was finally filmed in February 2016. Costume Designer brand Kim Pereira designed for Joanne Da Cunha. Bollywood actor Razak Khan plays a Goan taxi driver, and it came as a shock to the entire team about his death just six days after completing his scenes. The film took a long break after Razak’s sudden demise. The ADR (Audio Dialogue Re-recording) was done at Tiger Studio of Chowgule College by the Recordist Subivk, withediting by Yash Sawant, CG work by UNKNOWN STUDIOS, Verna by the VFX artist Jules Goes and Sunny Borkar. Additional ADR was done in Mumbai and DI and Grading lead by Renjith Touchriver, Srikumar of 24SE7EN Studio in Kochi and live foley and final mix was done at LAL Media in Kochi. “It was wonderful to assemble talented people from Goa, Punjab, Kochi, Los Angeles and UK. Everyone worked believing it is their own film. They somehow knew this would become something big and all worked hard to make it happen. From the pre-production to post-production, the energy was limitless. This is the first time in my film career that I had creative freedom from my producer Manpreet Singh (Manna Mohie) and I wasn’t restricted to anything. He believed in me the way I believed in this film. I wanted to take this film and the company (Manna Mohie Films) to greater heights. I never imagined that it would get selected to contest at The Academy Awards in General Category. Everyone’s time and dedication added to a great blessing,” says the director, Milroy Goes.
Related news