At times straddling the fine line 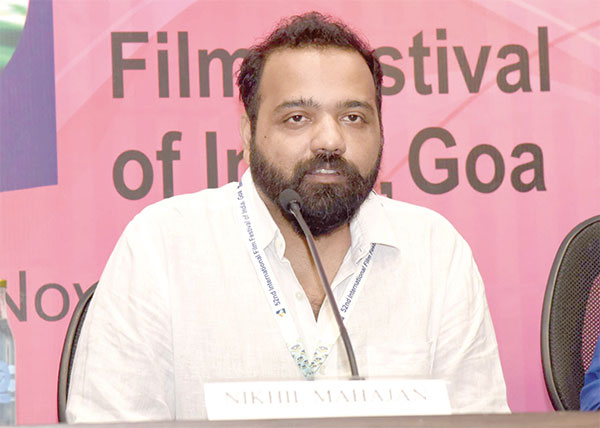 The relationship between man and woman has been discussed ad nauseam through the ages. It has been a subject of movies, some of which are very funny takes on it and others rather serious affairs. Now a Polish film called Leader which was screened at IFFI attempts to showcase how modern times can change the relationship quotient and it tries to portray women only from the perspective of men. This is the debut production by Korek Bojanowski. Asked about the most challenging part in making the movie, Cinematographer Grzegorz Hartfiel said the biggest challenge was the idea itself. “Most of the time, camera moves within a single room with 6 men! There were no landscapes, mountains and beautiful weather, but just a single room and what was to be captured were the intense emotions of these 6 men” he added in jest.

Leader is the story of a kind and shy boy Piotrek, who appreciates simple life. Due to the worldly pressure to do more and reap more, he falls into the trap of persuasion and determines to change himself for the people whom he loves. Here by virtue of coincidence he comes face to face with a charismatic but mysterious person with the pseudonym ‘Leader’ who is a personality development coach. There the protagonist meets other men from different circumstances who all fall prey to the emotional manipulations by the Leader who are ‘oppressed ‘by women.

Later speaking to this journalist he said the movie was a challenge to male patriarchy which was present all over the world. Asked if there was a response from the government which was staunchly Catholic and conservative, Grzegory Hartfiel said there was none and they just went ahead and did what needed to be done to make the film. Speaking of getting it done, Nikhil Mahajan the man behind Godavari, Pune 52 and Betaal said it was becoming difficult saying that earlier there were two or three things one knew which would wind up people. Now it was different, he explained. He said “Now if you talk about two or three things then you are safe. Now those two or three things I don’t want to talk about. So naturally what I make is always treading that line. By design it is a commercial art form. So when we are writing, we try our best, if we come across a line we feel might cause problems then I remove it. During edit you watch a scene and you feel it will be ok if one removes it then you remove it. After that if people still take issue on release, then it is their problem”. He said as artists after a point it was important to stop caring about what people felt because reactions would come for any art form. Nikhil said everything was being confused and everything was being looked at through a religious lens. Nikhil said as artists it was very important to be honest in what one was showing and it was a much greater responsibility than making a film. He said “You are actually creating documentation, so it was very important in what we say and what we do. We may do something now to please a certain demographic but is it going to stand the test of time. And if the answer is no then you have to do the right thing”. He said he had pushed the envelope off the table and it was important as filmmakers not to do something to shock, controversy does not work. A good film he said would work, a bad film would not. He said regional cinema was tackling various subject with great aplomb unlike the Hindi film industry which was held back by the star system.

Making movies that matter can be tough but the real artist will find the way to do what needs to be done.