Beyond Wellness: yoga is big business

There are several outlets in Goa that offer training to teachers and organise retreats to help practitioners learn yoga. Yoga is big business in Goa and the number of outlets that dot the landscape are a manifestation of that reality. People in the business spoke about it in detail 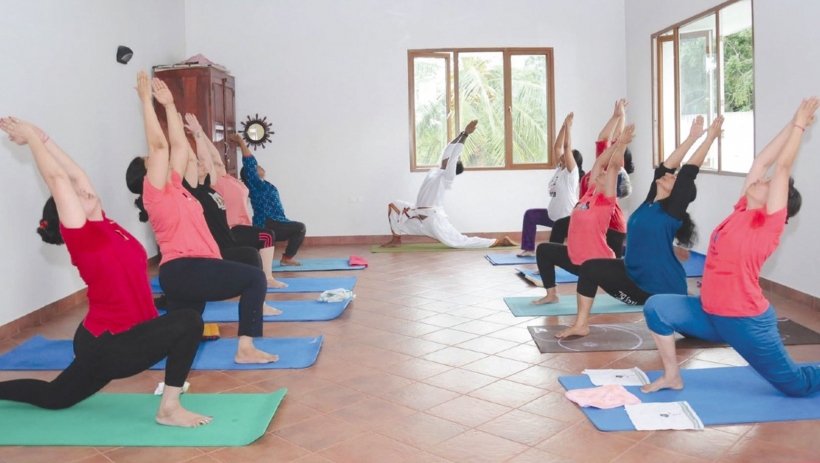 Today is International Yoga Day. The ancient Indian practice of physical, mental and spiritual wellness es or disciplines has grown in popularity over the years. It is also not uncommon to read about popular Bollywood as well as Hollywood who are into yoga, be it Kareena Kapoor, Bipasha Basu or Shilpa Shetty or for that matter Jennifer Aniston, Sting and Madonna, they are all avid practitioners of yoga. Goa is a place where people from all over the world come to relax and find peace. Yoga has developed roots in the state. The landscape on the coast as well as in places like Morjim and Mandrem are dotted with outlets offering to either teach or provide practitioners with an avenue. The number of such outlets suggests there is a growing market for yoga.

For Arkansha Mendes, her path to yoga commenced in 2009, during her stay in Dubai. It was driven by curiosity and it was also a time when she suffered from some physical ailments that seemed to defy treatment. It was a ten day course which included a diet which involved raw food. She said “Those ten days had a dramatic visible effect on my body. And yes the physical ailments disappeared. I could not believe it. However after that I went back to eating junk food”. A couple of months later the physical ailments reappeared and she realized the error of her ways. She took up yoga and has never looked back. Arkansha returned to Mumbai in 2019 and continued with yoga and then to Goa later. She introduced her mother to yoga with its breathing exercises and helped bring her diabetes and blood pressure under control. Having observed the number of lonely aged people around in her area in Dona Paula, she realised how scared they were living alone during the lockdown. Many had children who were working abroad and were scared to step out of their residences. She decided to commence classes that focused on breathing at the Goa International Centre which evoked a good response. She has offered her services to a school for the differently abled and hopes to conduct classes once a week. According to her the general reaction to yoga was that it could help its practitioners keep fit.

There are several retreats in the State where guests come from all over the world. Chandra Parihar of Nalanda Retreat based in Mandrem said he was promoting yoga in Goa since 2008. He said “We have been running yoga centres for a several years. We had a lot of international clients in the beginning. Then it was only foreigners but just before the pandemic, domestic tourists started coming for retreats. The place we are located is very peaceful. After the pandemic, there was a lot of interest from the domestic tourist. So now I will be available during the monsoon”. He went on to say he was promoting yoga and ayurvedic holidays. Retreats were organised with the lowest priced package at Rs 5000 per day and going up to Rs 10,000 depending on the accommodation and program. The rate of growth in his business he said had increased with the interest shown by the domestic consumer. People, he said, wanted to detox and Mandrem was the ideal place to do just that.

Visitors come from abroad to brush up on their knowledge of yoga or to do it in its birth place. Rohan Shroff of Satvan Yoga said the response had been very good. During the Covid virus of course everything was down. Recently he organized a retreat for three students from Serbia who wanted to practice yoga in India. Retreats, he said, were popular and could be customized. There was an increase in domestic visitors at his facility. He said “It can be anywhere between Rs 6000-10,000 per day depending on the accommodation, the kind of programme scheduled for the participants. The retreat can be for five days or a week or even longer with four to five yoga activities everyday.

Cyril Yogi of Yoga Holiday Retreat said the number of domestic participants in retreats had certainly increased recently. He said they had a twenty one day retreat which would include food and accommodation. For a seven day retreat it would cost a participant fifty thousand and he claimed he was confident of his expertise and anyone who expressed their dissatisfaction would receive their money back.

Manav from Anand Yoga village which was based in Palolem said they had started a teacher training course but then decided to focus on training customers in retreats. He said a retreat could be anywhere between four, five, seven or fourteen days duration. Participants could stay triple, double or single to a room. For a European it would cost euro four hundred and fifty for triple occupancy, five hundred and fifty for double occupancy and seven hundred for single occupancy. Most of his international clients came from the UK. For his domestic customers there was a seven day course for forty thousand rupees and there would be three sessions of yoga everyday. He smiled and said business was increasing every year.

Nilesh Shah, President TTAG said there was no doubt business was increasing every year and there was a paucity of trained staff. He felt with hotels and resorts offering yoga classes, Goan youth could get trained and take up the opportunity to take up jobs at these hotels and then perhaps move on to start businesses on their own. The pie he said was growing now with the government pushing yoga aggressively and people in the State should take the opportunity to become certified yoga instructors.

The yoga and the wellness industry in general was growing and it made a lot of sense, he felt to have Goans make a mark in the industry. One can hope his hopes turn to reality with young Goans learning the skills that will help them earn a pretty penny.