The records keep adding up, as Vinyl & Feni meet in Mala 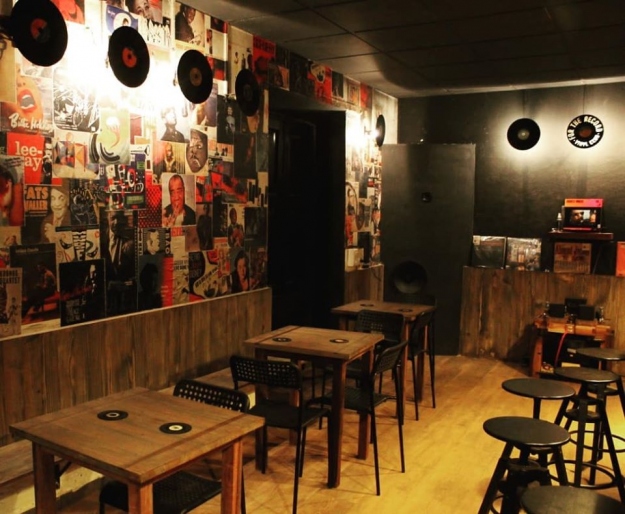 Miles Davis lives here. Louis Armstrong lives here, Muddy waters lives here. Buddy Holly lives here. And they play here. Along with some of the greatest  artists the world has seen. Their voices immortalized by acoustics which make you feel you have new ears. And it is here sitting on the bar stool or the benches, you could hear Ella sitting right next to you- Ella Fitzgerald silly- the first lady of Jazz  or hear the saxophone thanking John Coltrane for doing the instrument the highest honour by touching it, playing it. Yes they come alive, through handcrafted instruments, mainly made of wood, in a bylane in Mala, where local brew pours and spirits soar to the tunes of the greatest musicians of the world.
At this Vinyl bar, mankind’s greatest desire of serenity gets satiated. Music in the manner music should be listened to- pure, clear, with not a speck of adulteration, in a bar where just one brand of alcohol, with a local touch is poured, all curated by  a sound engineer and architect, Buland Shukla who moved to Goa from Ahmedabad because his PHD guru was Goan. Buland could very well pass off as a jazz player himself doubling up as a DJ, bartender or artist. Heis a bit of all that, wearing most of these hats, besides the one he really wears when he’s bartending,  and much more really An arena comprising of a courtyard and insides of  an old Portuguese style housing space, the Juke Box complex in Mala- Fontainhas, in Panjim, houses his Vinyl record store, an upcoming art and café space and the first ever Vinyll bar – For the Record, the first of its kind in India. Yes that’s right. It is inspired by the Vinyl or Listening bars in Japan, hidden in the foliage of narrow streets and cafes packed together, next to Karoke bars and Yakitori stalls. Similarly, For the Record is a place you don’t wander into. It opens up to those who look for it, care to find out about it. It’s like an answered prayer for those who love to hear music in the manner it is served, in the comfort of a pace that is truly like a home dug out, with drinks you would stock at home. So the whiskey would be a brand distilled in Goa, the  agave spirit and tequila made by a local boy whose brand has gone international. And the local feni would obviously be the prince of the bar. So if in Japan you would have acid jazz and mojitos, bebop and sake teaming up, here at For the Record Panjim you would easily have a feni cocktail and John Coltrane evening Buland Shukla has played with the architecture of sound and its craft and creates turntables,  and by extension, a complete ensemble to play Long Playing records, all handmade in the rooms of this house, his workshop. Wood is a big player in this game- jack fruit wood, crocodile bark tree wood along with cork, all of which go into making composite frames. Everything from wiring to speakers to the copper arm boards are created and it is one of these systems that plays all his vinyl records. The records on the “playlist” for the day are hung on the wall behind the bar and those are the LP’s that are played for that evening- more or less. “The joy of communal listening is difficult to explain. The warmth of vinyl somehow blends people together. The feni cocktails help as well”, posts Buland on his Facebook page. Let’s quickly move to the cocktails, because very few have made the already redoubtable national drink of Goa, taste even better. It’s a flirtation that is divine. Some are roasted cashew wood infused, some cherry wood smoke infused, there are those made with bimbli ( the tangy fruit) juiced with feni, orange liqueur and fresh lime, and the flower power which is combo of mahua and feni (should have been called fruit and flower power actually) and of course the feni margarita. But for diehards, it’s  the original favorite- feni as it is, with the drink called Goencho Dukar “a refreshing house favorite which make you drink like a pig”  (that’s what Buland’s menu says) The folks who are here come to truly enjoy the music, at times gently asking Buland to play their favorites. And if it’s on the “menu” he plays it. While the bar is not too large, draped with pictures of the greats and covers of records, there’s still space to shake a leg or simply sway to the music. That happens instinctively. Your feet, have a mind of their own. It’s amazing how this town keeps reinventing itself and keeps its old charm alive in new ways. And it does so by also welcoming kindred souls from outside Goa, who make Panjim their own and infuse their adopted town with energy and affection that spreads like a virus, which we never want to get rid of.
Related news