The ban on TikTok the platform has tapped into a patriotic spirit that is now quite strong given what has happened on the border with China. Café spoke to the young to understand what they felt about this move. 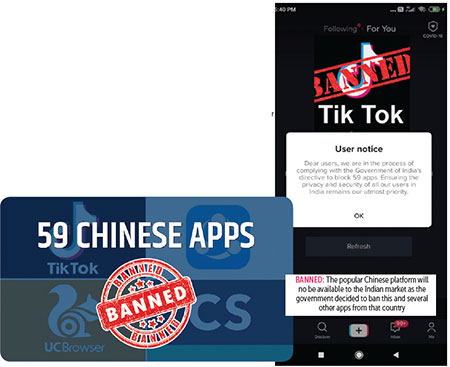 Ruchi Patel said she used to use the app a lot and in fact at one point of time she was spending as much as an hour or two on it. She said “It was great fun watching the videos but I soon realised I was spending too much of my time and literally wasting a day. I had too many other things to do and this app was not helping me”. Asked how she felt about the app being blocked, she said following the firing and killing of twenty soldiers, India had to retaliate and show it would not be cowed down. Since the app she said was very popular in the country, it also meant they were earning a lot of money possibly and this ban would now ensure that would stop. She said she completely understood and agreed with the ban.

Another final year student in a college in Panjim, Pranali Mantri expressed her happiness with the ban of the app. She said “I really feel that it was a waste of time and could be used to do something way more productive. Hence, I've never used or installed TikTok anytime and I did not ever support it in any way”.

Another student felt the app made her cringe. Shreeya Kudchadkar said “Of course, there are people who use Tiktok to share their talent for eg: cooking, art, fashion, acting etc. To those few, this ban will really impact them. I support the ban and so do many of my friends”.

Menosha D’costa felt the app had helped many youngsters who shot to fame after posting videos showcasing their talent. Now with it being banned, they would have to find another platform to do so.

Shikha Lagali felt it was good the app was being banned for a good cause but time would tell if it was a good decision since many people were able to earn by posting videos on the platform.

Sanjana Nair gave a far more detailed response. She said “Personally I feel Tiktok is just a Chinese bomb among the Indian app space. There have been many incidents leading to death because of the use of TikTok , so as to gain popularity. There are three categories of people as far as Tiktok is concerned. The ones who create the videos for fun and fame, the ones who just view the videos for entertainment purposes and those who are completely against it and find it cringey. I am absolutely fine with this ban”.

Roshni Gupte was direct and to the point when she said “In the recent past, we all are aware of what strategies China is playing with us from spreading the harmful Coronavirus and now they killed many of our Indian Soldiers. I think the government has taken very good decisions of banning Chinese apps and other commodities. This is the stepping stone to break down their economy and I stand with it”.

The ban on the app has certainly tapped into a patriotic sentiment that is quite strong amongst the youth and the general public. It remains to be seen how this will move ahead in the days to come
Related news