Velrose Periera is a Goan singer-songwriter, trumpeter and actor based in Toronto, Canada who is trying to improve the quality of Konkani music complemented with well-directed music videos. Speaking to Café, she credits her father for her success 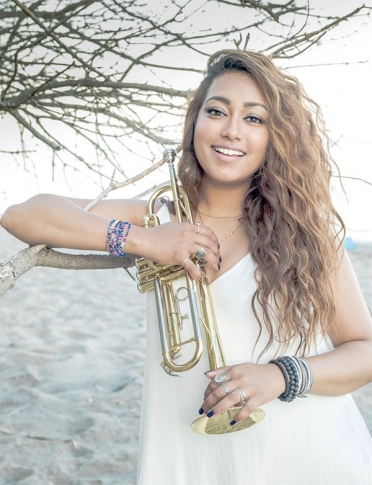 Velrose Pereira, a Goan musician, has made a mark for herself in the music world in Goa and abroad. Her career is on an upswing and poised to soar even further.

“I have been really blessed with the support I have been getting from Goans not only in Goa but all over the world. Even in Canada, there was immense support. I think further Goans tend to go away from Goa, they stick strongly to their roots because one of the ways you can stick to your roots is through music, events and shows. I am blessed to receive so much love and affection from Goans. I am blessed that way,” Velrose said.

Although she has received a lot of recognition abroad, she is in awe of Goan talent, tiatrists especially. “We must give a lot of credit to artistes in Goa. Most of the artistes in Goa earn their living from Tiatr and fulltime music. We must give credit to them. It is not that easy,” she said.

Citing an example of her father, she said, “My dad, Avers is finally following his passion. He is a tiatrist. I have seen him leaving home at 3pm and returning home at 3am. But I see a passion in him. So, I think there are so many artistes in Goa who put in their sweat and effort into not just keeping Konkani and Goan music alive, but also sustaining through it.”

Velsrose entered the field of music at the age of 7 years. How did she enter the field at such an early age?

“When I was 7, my first performance was with my dad on Doordarshan. My dad was part of the DD and sang for the public broadcaster. I was a very inquisitive child and always wanted to know what was happening and wanted to get involved. That is why my dad took me along with him. My first song was called Suvit Goa. Then after that I went on to perform live with him, which was a complete disaster. But I think the criticism helped me improve myself,” she said.

According to the ace performer, she could tide over the criticism because of her father.

“I must give a lot of credit to my father, who taught me that taking criticism is very essential part of your growth. More than compliments, I appreciate when someone criticizes me. That gives me room for growth. Whenever I finish my shows, I seek feedback of my senior artistes about my performance, where did I go wrong. That’s how you learn and grow,” she said.

When asked about the role talent plays in an artiste’s success, she said that people are born with nothing.

“What we become is solely based on the environment we live in. As well as the effort and hard work we put in. Yes, to a certain extent I would agree that talent is God given. But having said that, I know there are incredible artistes who have made it big which is solely on the basis of their performance,” she said.

Velrose went on to call her father as her greatest inspiration. “I have seen him step up and protect me. When I told my friends and family that I wanted to move to Canada to pursue my theatre degree, he was someone who supported me throughout and fought for me. So, it is definitely my father.”

Speaking about her experience of leaving her family and moving abroad at a young age, she said that her mother and younger sister struggled a lot in comparison to her father.

“My mother struggled more than my father. My father is a more practical person while mother is an emotional person. My sister also. We have 7 years of age difference. When I left home, I was 17 and she was about 10 years old. So, I left her at a young age. It was hard,” she said.

When asked about the difference in shooting for shows in Goa and Canada, she said that if it is a Konkani song, shooting in Goa is better because it gets the Goan feel and spirit.

Of all the instruments she plays, trumpet has fetched her most popularity. But it is rare to see women playing this instrument. So, what prompted her to choose trumpet as an instrument?

“My dad had a huge role to play here. He was always that kind of a person who said ‘if a guy can do it why not a girl?’ And I think that’s where he pushed me to initially take up the trumpet when I was in school. One has to be focused and see where the niche market is. I saw that niche market for women trumpeters. We have a gift of beauty and stage presence. I definitely saw spark in the trumpet for women,” she said.

In Covid times how challenging it was to perform virtually since it is very different from doing live shows.

“To be honest, I was doing live shows in Canada before Covid. But I realized there was so much of improvement that was needed. Even now I need improvement in trumpet. But I think back then I don’t think I was grounded enough to understand it. I was alone, away from home. It helped me to realise who I was as a person, what I want in life and understand my showmanship what I can do as a musician and put in lot of hard work,” she said.

Speaking on tiatr she said it is a unique art form of Goa. It represents Goan ethos. “At the age of 16 when I did my first live theatre. I enacted the role of an autistic child. I received a lot of love from the audience,” Velrose said.

On her upcoming projects she said, “I am working on a song on the trumpet. ”