EDM’S will not dance away COVID, feel Goans

The state government has given permission for Sunburn to be conducted this year. Considering the fact the virus is still around causing misery, is it the right time to have such a party where thousands of people will congregate in one place. Is this the right decision now or will it backfire spectacularly. Cafe spoke to Goans to ascertain their views 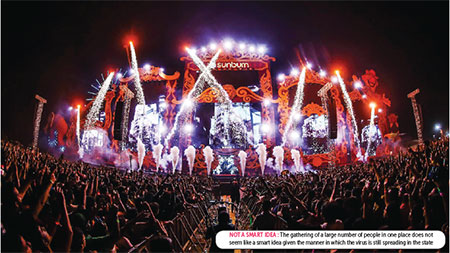 Sunburn is one of the more popular EDM parties held in the country and Goa has been its home for quite some time. Thousands of tourists come from all over the world to dance their blues away. However with the pandemic still raging, notwithstanding the reduced number of daily cases and deaths, the decision of the government to host the festival is not quite music to the ears of Goans.

In such situations, one can safely predict that social distancing which is a pre requisite in such situations will be ignored thus exposing thousands to the possibility of being infected by the virus.

We would like to stay healthy. Will not be attending

I have been attending the festival over the last two years and I have enjoyed myself. However, I don’t think it is the right decision due to the pandemic. Having a party or a Sunburn party is a wrong decision. It is just not possible to have social distancing at a party. I will not be attending the party this year. My friends who usually accompany me to Sunburn will not be attending this year. We would like to stay alive and healthy. Perhaps next year, if the situation improves- Shripad kurtarkar student

You cannot have social distancing in such a festival.  Blanket ban is the perfect solution

I have attended the festival for the last three editions. It has been great fun but I am not interested this year. You cannot have social distancing in such a festival. Yes, I am aware pubs have opened and I have watched those clips of people partying without maintaining social distances. If the protocols are in place the fine. I attended the Vir Das show and the organizers had taken care to ensure separation and it was very well organised. With alcohol at Sunburn, it will not happen. I think a blanket ban is the perfect solution- Apoor Naik  student

Been a great experience but this year, no thank you

I am not for it, for the simple reason social gatherings are the biggest cause of the spread. Our infrastructure is not in place to track cases and I don’t think we have the infrastructure to support the existing cases. I think the government should be making the people aware of the importance of maintaining social distancing and following other sops.  I have been attending Sunburn from 2009 and it has always been a great experience but this year, no thank you- Peregrino D costa Businessman

The organizers should have postponed it and held it in February.

I don’t think many people are for it. It is difficult to maintain social distancing. I have always attended the festival and enjoyed myself.  You have to remember Goa is such a small state and with the influx of tourists for Sunburn, there could be a dramatic rise in cases. The organizers should have postponed it and held it in February.  Tourists are coming to Goa, going to restaurants, it is ok.  The numbers of cases are declining and if this festival is held there will be a spike in the number of cases- Alvaro Miranda Businessman

Last year I attended but this year no way. I don’t think it is the right thing to do considering where the world is now with the virus. There is an unhealthy environment and it will be a disastrous decision. It shows the irresponsibility of the government. It is not possible to organise such an event given that alcohol is available. It will not be possible to have social distancing. The videos circulating show the pubs are packed and we can see the number of cases increasing- Myron  Fernandes   Service

The government should be proactive in stopping such events

The government should be proactive in stopping such events, unless they have strict measures in place. With alcohol it would not be possible to maintain the sops. It is a bad idea to organize it this year- Dr Dorland Martins Margao

We are not prepared for such a program

In a situation like Sunburn it is difficult to practically follow all the sops. We are not prepared for such a program.  Such programs are welcome but not now with the situation we are in- Bruno Gomindes Tourism professional

It is a very wrong decision. We will not see anyone maintain social distancing.

It is a very wrong decision, if you go onto their ticketing procedures; they are selling beers too which is a very risky proposition. We will not see anyone maintain social distancing. Anyone at such large congregations is at risk. It should have been postponed to next year- Milroy Goes Film maker