Effy the independent scripts his own creative course 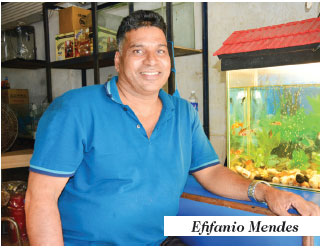 When working on tiatrs, Efifanio Mendes prefers to script dialogues, comedy, and songs independently. His initiative helps him to work at his own space and bring in more creativity, wrapped with originality.

Goa-Velha based Efifanio Mendes, popularly known as Effy, was born on November 12, 1966. With primary education at St Andrew’s High School, Goa Velha, he had ample opportunities there to participate in one-act plays, and thus showcase his  theatrical skills on stage.

At the tender age of 13, in the month of May, Efifanio picked up a tiatr ‘Meulem Punn Favo Na’ from his cousin, Agnelo Vaz based in Pilerne, directed and staged it in his Mascarenhas ward at Goa Velha for the annual feast of the Holy Cross. “The feast of the cross is quite popular in the month of May in various villages across Goa,” he revealed, and that enthusiasm motivated him to pick up and train all the participants from his ward.

At the age of 15, Efifanio took the initiative of scripting his first tiatr ‘Kallok’ and with the involvement of amateur artistes from his ward, he presented it for the annual feast of the Holy Cross in his locality. “In the 80s, there was a craze to stage tiatrs in the respective wards in the village for the annual feast of the cross or chapel,” he concealed, “and during that period there was never a dearth of tiatrists in the village. Those wards which were actively involved in staging tiatrs then included Mascarenhas Vaddo, Dando Vaddo, Zuari Vaddo, Forgottem, St Francis Vaddo, Uddy Vaddo and Dias Vaddo.”

“The trend of staging tiatrs in the respective wards of the village with local artistes continued for quite some time,” Efifanio stated, “but it slowly encountered a natural death.” “It could be due to financial constraints or untimely demise of tiatrists then,” he said, “or it could also be due to some of the tiatrists flying abroad, seeking greener pastures.”

Soon after penning and staging his first tiatr, Efifanio continued with another three productions, namely ‘Khobro’, ‘Khot’ and ‘Kheast’ for the annual feast of the Holy Cross in his ward. After a tryst with four productions, he proceeded to Dubai for better prospects.

Efifanio served in Dubai for 9 years and during his tenure there, he picked up the skills of making aquariums and maintaining fishes. On returning home, he took up the business of running an aquarium shop ‘Aqua Garden’ in Panjim city and continues with the same for the past 20 years.

While totally engrossed with a different venture, a friend approached Efifanio and sought songs from him. He obliged with a solo and after participating in the annual Kala Academy (KA) tiatr competition, the artiste won the second prize. The following year, he penned a duo for his friend, and participation in KA’s ‘kantaram’ competition helped him to pick up the first prize.

Since then, Efifanio has been inclined to pen songs on varied subjects in the form of solos, duets, duos, trios, quartets, and chorals, though he humbly admits that he borrows music from popular songs of yesteryears as he has not much knowledge of music and study about notations.

When the Tiatr Academy of Goa (TAG) came into existence and it organized Konkani singing competition in various categories, Efifanio participated with his songs (trio, duet, and quartet), but bagged no prizes. But from there, it was a return to the tiatr field with greater zeal and enthusiasm.

Seeking greener pastures, Efifanio proceeded to the UK in 2015. On return from the UK in 2018, he penned another tiatr ‘Bye Daddy, Bye Mummy’ and participated in the KA’s tiatr competition.

After a tryst with tiatrs at KA’s tiatr competition, Efifanio also staged two children’s tiatrs ‘Oxench Cholta’, which was awarded a special prize and ‘Vegllochar Kiteak?’, which picked up best duo and best trio awards in the category of songs.

Efifanio has plans to set up an audio studio at his residence in order to assist those who face financial constraints. Plans are also afloat to have a fully equipped stage at the same venue, which includes stage sets, lights, and a sound system meant only for rehearsals. “Topmost directors can afford to have one or two rehearsals in the city’s auditoriums before the grand release of their tiatrs,” he mentioned, “but the newcomers and upcoming tiatr directors could easily avail of the same facility at his residence at reasonable rates.”

And with the latest craze of uploading songs on the YouTube the channel, Efifanio is willing to part with his compositions to those seeking them, but with certain terms and conditions.