More people are now interested in taking up activities like cycling, running or even swimming to stay fit. The virus enforced lockdown forced people to find a way to stay fit with gyms staying shut. Café spoke to various people who are running, swimming and cycling to ask them how they got into it and how did they feel now. 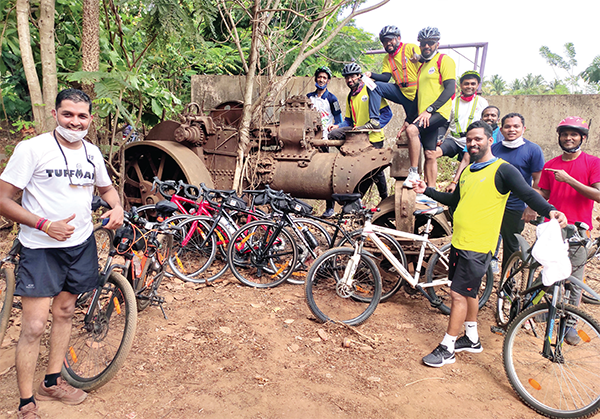 He noticed his wife would occasionally look at him with mild irritation. And then on his birthday she gifted him a cycle. He walked over to the mirror and looked at himself and then realisation dawned on him. He had gained weight. His realized his stomach had developed a personality all its own. Realising he had to sort this out immediately, he started cycling, everyday. Like this young man there are many others who took the decision to start running, cycling or swimming. This impetus received a boost once the virus kicked in with a vengeance shutting down various gyms around the state. The state noted for a sedentary lifestyle seems to be kicking itself into action.  Megan Fernandes said she started doing it seriously last year and was basically interested in staying fit. She used to cycle to school every day and this helped her keep fit, she would even cycle to college causing much mirth around. She said “Now people seem to understand the benefits of cycling though some people at college still laugh.” She said she was now part of a professional cycling team called Team Probike after they watched her cycle 200 km. She said it was all great and it was interesting to see so many cyclists on the road since the virus hit. She hoped the trend would continue because it would result in a healthier society.  Rahul Chandawarkar now a veteran of seven triathlons and at fifty eight the oldest to be still doing it said there was definitely a very clear spurt in physical activity due to the pandemic. Speaking to the Café as he sped along on the highway enroute to Dindigal in Tamil Nadu he said “I see a lot of people cycling. I know a lot of people pulled out their rusty cycles in the villages and started cycling. Teenagers are running a lot more. There are a lot of hobby cyclists; it is an easy and accessible sport. The regular marathoners and cyclists are moving out more. I started swimming in the sea and cycling long distances through the villages”.  Indrajeet trains people to swim out at sea said when he started a couple of year ago he had 7 people training under him but now that had increased dramatically to seventy. He said “This surge in people signing up started after the virus hit. I have people between the age of 7-75 training under me. There is certainly a trend towards getting fitter especially after the virus spread”. The majority of his students were there to get fit and learn a life skill and the more serious ones were training to participate in triathlons and the Iron Man. He ended by saying it was important to learn to swim in Goa considering there were so many water bodies around and it would be useful if one fell into the water and avoid drowning.  Finton Dourado all of 49 said he had commenced cycling two years ago though prior to that he was running half marathons. He took up cycling for cross training and now preferred it much more than running. He said it kept him very fit with him cycling a minimum of 50 km a day to a max of 100 km when he had the time. He was completed a 600 km ride from Margao to Pudbidri. He said there was a time he could not even run 5 km but after getting help slowly started increasing his endurance.  Narciva Nagvekar found fitness after he commenced cycling. He said “I was getting fat and my wife gifted me a cycle. I understood what I had to do and commenced cycling. Today I can wear clothes I could not get into. Infact I have also started running and swimming. I feel healthier and the same can be said for the five other people in my group.”  Ashutosh Naik runs, cycles and has recently commenced swimming. He said “I am doing my Bachelors in Physical Education to start training other people. People now seem interested in getting fit but we have travel a long way before we can consider ourselves a fit society. Today I see older people running though I feel once the fear of the virus goes away, fifty percent of the people indulging in physical fitness will go back to their sedentary life. I am doing viral runs and organized one this year”.  Sunil Jadega managed to get his weight under control after he began cycling. He said “I used to run, then cycle and now I even swim in the sea. I feel so much better and I think everyone should do some sort of physical exercise. Right now I start the day with a swim and go cycling later in the evening. My work schedule is hectic but I have to find the way.” Captain Robert Vaz runs and cycles himself but has also managed to get people interested in these physical activities. He said “People are now more open to the idea of doing these activities. I see a lot more people running and cycling on the road. It is very important to stay fit as one gets older. Recently I organized an event where the youngest participant was eight and the oldest sixty. It is very encouraging when you see them come back because they can see the benefits of doing this.” One can only hope this trend strengthens as a healthy individual helps makes for a healthier society.