Full Reopening of places of worship: Goans living on hope and prayers

The Maharashtra government has decided to allow places of worship to open from Monday which then raises the question as to when worshippers in Goa will be able to go to church or the temple and worship with the passion and freedom of old. Café spoke to members of the church and pujaris to get an idea. 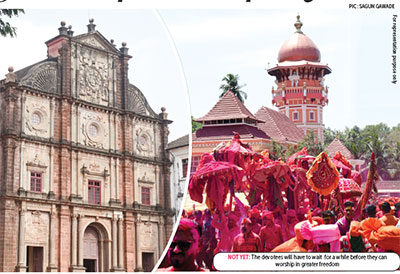 The virus knocked down everyone’s defences. It reduced the strong, the healthy and the financially stable to pitiable conditions. The pleasures and luxuries of the twentieth century became distant memories. And sadly for a lot of people, it was that time when they could no longer go to their place of worship.

On Monday, the Maharashtra government decided to allow temples and churches and mosques to start functioning again.

The churches and temples are open in Goa too but the darshan’s and the celebration of mass with the entire congregation is not happening as yet.  Father Berry of the Diocesan Communication Centre said no one could predict what would happen next. It was all very fluid and volatile.  He said “Each and every parish will have to decide depending on the situation on the ground. The Archbishop has given the option for them to decide. Now all the parishes have taken permission to conduct masses with limited number and everyone attending will have to follow the sops of the government and the instructions of the church. We have to worry about the health of the people especially those who are vulnerable. The guidelines are all in place. At the end of the day the people who attend service will also have to take responsibility. With regards to the whole congregation coming together and celebrating mass, look at the situation.”

When asked if Christmas midnight mass would be a reality, he said it would all depend on the situation at that point in time and it would be fruitless to indulge in conjectures now.

Father Joaquim Loyola Pereira, Secretary to the Archbishop of Goa said the virus still had a grip on the state   and unless the situation on the ground changed nothing would change from what was being followed right now. He maintained it was important to forth ensue by the government the instructions of the church.

The situation was no different at the various temples. Bhushan Bhat the priest at the Shree Mahalaxmi Temple in  Jim said darshan was on for devotees from 9-12 and 4-7 but all the devotees had to follow the social distance as instructed by the government. Yogesh Joshi of the Ganpati temple at Altinho said they were very strict with devotees and everyone was mandated to follow social distancing.

Nitin Desai, President of the Shantadurga Kunkalikarin Devasthan said the indoor activities had commenced however activities like the palkhi procession which had to be held outside had not commenced.  He said “ The indoor activities are conducted with minimum people and no one from outside is allowed during the puja. We send 4 to five people who come for darshan with a break. They have to wear masks and there are sanitisers all over the place. To discourage people on Sunday when the puja is held, we keep changing the time from 5.30 to 6 o clock. We are very strict about the sops”

The virus has ensured that everything will no longer stay the same. One can only hope a cure for the virus will come out and help people conduct a few activities like attending a mass or a go for a darshan in the manner that was one prevalent pre-covid.
Related news