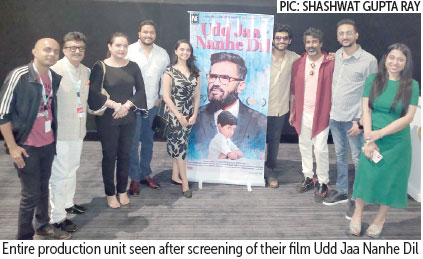 Following the Suniel Shetty starrer ‘Udd Jaa Nanhe Dil’s Asia Premier at the ongoing 53rd IFFI in Goa, the director Swaroop Raj Medera said, “We tried to send out a positive message where in today’s world everybody is missing the bond between parent and child, where we keep running towards the materialistic world. But in the process, we lose out on several key elements of life.”

The film is produced by Aishwarya Yadav, Sachin Jain, Prashant Kale, Shriya Torne and Dhruva Karunakar under the banner of Navaras Entertainment in association with Scripto Productions. Creative Producer Saiwyn Quadras (famed screenplay writer of ‘Mary Kom’, ‘Neerja’, ‘Parmanu’ and ‘Maidan’) and Vishal Kapoor who has written the screenplay and dialogue are the main creators of the movie’s essence.

The movie is a heartwarming story of a young boy from the slums getting an opportunity to study in an English medium school by the principal of the same school. The story follows the journey of children from various social strata coming together to stand for each other.

When asked about how Suniel Shetty came on board for the film, she said that the film’s theme prompted him to work in it. “Suniel Shetty Anna after listening to the story agreed to work in it as he hadn’t done anything like this before. The content of the film was very strong. This worked for us,” she said.