Goa’s future: What are the keys to open our locked destinies 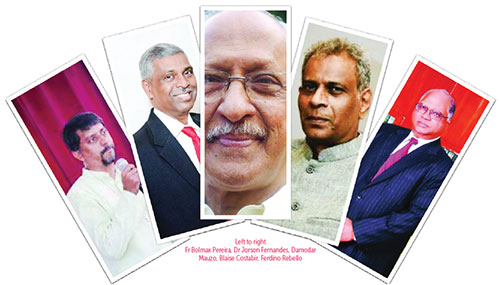 The future of Goa is a topic that has excited much discussion. Recently a webinar was conducted on the theme "Where are you going, my Goa". A group “Concerned Citizens for Sustainable Development of Goa” brought together some f the  finest exponents from various fields to debate this

Mr Alexandre Moniz Barbosa, Editor of  Herald started proceedings by saying that he recalled memories from the early 1990’s when the beaches could still be called pristine and when one could walk barefoot on the sands. It was possible to walk along the beaches from Velsao to Cavelossim with the sea on one side and fishermen’s huts, palm trees and sand dunes on the other.  However now in 2020, he pointed out the silver and white sands  had acquired shades of brown and there was a fear of walking barefoot on the beaches  due to the broken bottles and even shards of light bulbs abound in the sand.  Waves now deposit plastic and other garbage and one will be accosted by hawkers and water sport operators. Upon reaching Cavelossim, after have driven by patches of uncultivated fields and concrete structures, one had to ask oneself what happened to the Goa one once knew?

The Mopa plateau he pointed out which was largely agricultural and a grazing ground until recently would be changing dramatically. He said the Mopa Planning and Development Area has been given the highest Floor Area Ratio in Goa – it says the FAR here can be relaxed to 4 so one could expect some very tall buildings in this area. One could only imagine the changes in Goa in 2030. The third bridge over the River Mandovi is ready and the one over Zuari will be ready by 2022. The highway expansion to handle the additional traffic from Mopa airport, with an initial capacity of handling 5 million passengers annually will be ready. The changes he pointed out could not be imagined. Development could not be avoided he said but Goa was like a vehicle hurtling on the freeway of development. Is this the path that Goa is taking? So I ask, where are you going, my Goa?

The question as to what do we want for Goa in 2030 has to be answered with nuance.  The virus has not helped matters. Goa is now the first state to have 1 per cent of the population testing positive for COVID, and at the current rate at which cases are increasing, it won’t be long before it touches 2 per cent. The economy was already down, the environment under attack while there was only lip service being paid to agriculture, no clear roadmap to restart sustainable mining operations even as tourism was on the wane, the Mhadei muddle has pulled in Goa deeper into the waters and across the State large tranches of land get converted for development purposes. Take for instance the three central project of double-tracking of the SWR line, the expansion of the highway and the power project for which thousands of trees are going to be cut and houses destroyed. The question is how important are these projects for Goa, what purpose will they serve? Politics in Goa requires to be completely cleansed if the state is to see a new future. No one is against mining operations but it ought to operate within the ambit of the law.  Next year will be the 60th year of Liberation and it is time the gains reach everyone.

The speakers that followed minced no words either.

Justice (retd) Ferdino Rebello, former Chief Justice of Allahabad High Court and former Judge of the Bombay High Court: He said money power had degenerated politics. The economic situation was dismal he pointed out with mining closed since 2012. He  said two judgements delivered in 2016 and 2018 and further there has been an amendment stating that mines must be auctioned. The citizens were deprived of the revenue that they can get from the auction and would have to ask the question as to why not start mining through the auction process under the provision of the law? Set in motion the auction process. It will bring in revenue to some extent and that would revive the plummeting economy.

Damodar Mauzo Acclaimed Konkani novelist and short story writer: Damodar Mauzo said the freedom of expression was under threat. Those who speak out were being targeted. Popular opinion was not respected and a lot of pressure was being exerted by the authorities on those who speak about politics of sheer opportunism and corruption. Goa he pointed out was becoming a city-state and was losing its cultural identity. He felt electoral reforms were the need of the hour with the growth rate of the Goan population at zero; while on the contrary, the same was not the case of migrants. He warned that by 2021 migrants would outnumber Goans.

Blaise Costabir Chairman CII Goa and past President of Verna Industries Association: He felt the industrial sector, the hotel industry and allied fields and the overall economy of the State were under severe stress following the Covid-19 pandemic. Industries were in search of labour, with the locals, even though struggling showed no interest in taking up the employment opportunities. To add to all this in this tough economic scenario the government went ahead and raised water charges to raise funds.

Dr Jorson Fernandes ENT surgeon: He brought to light the fact the Education Department and other educational authorities do not have a strategy for reopening of the schools and other educational institutes. How is it possible to wash the hands (30 seconds for each student) with such a limited number of washbasins and toilets in the interval period of 20 or 30 minutes. And, who will provide soap for all of them? And, what about safe distancing? Dr Fernandes pointed the mismatch between the needs of industries in Goa vis-a-vis the educational requirements in terms of job opportunities. If the majority of employees in the pharma industry at Verna are from the neighbouring states it is because at one time Goa had just one Pharmacy College. There is no synergy between the educational sector and the industries requirement, Dr Fernandes pointed out.

Dr (Fr) Bolmax Pereira, a priest fighting for social causes  highlighted the Goan socio-political scenario had undergone an unimaginable change of late, often forcing people to come on the streets to voice their indignation at the sad, never-before-seen scenario. He felt it was important for people to ask the relevant questions to the politicians. Politicians must be made accountable. One needs to get answers to the questions - what are we losing and what are we getting in return