Goa’s very own soft-spoken ‘green’ firebrand, Tallulah D’Silva has won a prestigious shared second prize in the 2020 Golden Door Awards, the world’s first International Awards for Truth & Integrity of printed literature and digital content. Those who participated in these prestigious awards ranged from Public Speakers, Musicians, Journalists, Authors and activists from all over the world. The award recognizes non-fiction writers not only for the quality of their writing but also as agents of truth and integrity 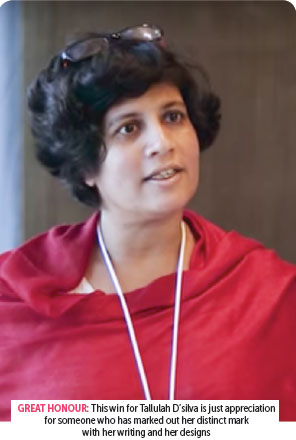 One of Goa’s most passionate and perceptive observers of the environment has won an international award commending her for her truth and integrity of the written word. Tallulah D’Silva won the joint second prize in the essay and blogs category. She shared it with another eminent healing therapist Roshani Shenazz. The first prize was not awarded making this win very prestigious and world ranking for shared second prize winners.

Tallulah who is a columnist with the Herald has been a prolific writer on topics as varied as architecture, relationships and values to name but a few. These subjects are tackled on her blog called environmentally write. The prize by the Golden Door Awards is an attempt by the organization to provide a

launchpad for the truth-writers to become truth-creators as they embark on a journey that will outshine the ordinary. The writers can include the odd published writer but generally, they are musicians, chefs and people from various professions. Interested writers have to apply for the prize. Tallulah took two articles of hers called The Enemy of my childhood and Potato and Potato and combined it to make it an article about relationships and its importance in one’s life. She emailed it to the organizers. The organizers had set up an impressive jury to evaluate the articles.Talullah said the writing was always very interesting because many people were involved in jobs which would perhaps not allow them to do things they want. This platform gave them the opportunity to state their positions on issues that troubled them greatly. She said she was pleasantly surprised as her article moved through the process and was finally awarded the second prize. Since it all held online it was a great opportunity to connect with great writers both seasoned and upcoming and also attend several workshops.She said the entire experience made her more confident to write what she felt without fear and she was glad she had made an attempt to start writing all those years ago.Tallulah hopes this will be the start of an even more prolific phase in her life.
Related news