Here come the trains. And they are raining COVID cases

The trains are coming. So is the virus. Does this then not make it obvious that the train services ought to be stopped or handled well to ensure the situation in Goa does not get worse. And then there was the Chief Minister’s remark that the Rajdhani express from Delhi will not halt in Goa but the Nizamuddin express will since no passenger disembarking fro that train was tested positive. Really? Does the virus like particular trains? Let’s see what people in Goa have to say 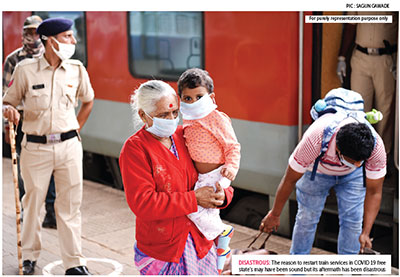 The trains are stopping in Goa. But the COVID cases in Goa is like a runaway train. But saying that one train cannot stop because passengers from there tested positive, by none other than the Chief Minister was either a case of humour gone wrong or an extremely alarming statement. Or at least that’s what many people in Goa think

I have no idea where the CM and a few of our ministers get their inspiration from, but it keeps up the morning humour during lockdown! Differentiating between two trains from the same destination, needs to be backed up with a scientific explanation.  Goan’s all over have become sceptical and have lost confidence having been made to jump on and off the horse since the lockdown began with contradictory rules and statements! Goan’s should have the first right of returning home before all permutations! Right now our state is being watched by the entire country and we need to seize the opportunity and build our brand, rather than random decisions and statements that will only bring on disaster which we just cannot afford anymore! Having had so much lead time on repatriation and so many paid and volunteer medics, taking huge risky steps without planning is sacrosanct! Some of the 20,000 rail coaches converted into covid centres could be attached to the trains which could easily enable COVID testing on the trains itself before disembarking. It would also be easier and cause less frustration to the people! Unlike the Center, the state’s dissemination of information has been contradictory since day 1- Lyndon Alves  Owner Sunset Getaways

It’s really baffling to me that the authorities think letting specific trains in while barring others is a reasonable policy. It’s also disconcerting that train loads of people are being let into Goa when there has been well documented cases of COVID  infected individuals entering the state unhampered- Jason Fernandes Founder Token Jay TV

My take is the virus doesn't choose between people, period, which train the people board is irrelevant, if we choose not to let trains stop in Goa, then by by default it applies to all trains- Shyam Haridas, Wedding and Events planner

The virus sees no religion, no colour nor background. But the risk of travel by train or any public transport aggravates the chance of carrying Covid-19 and spreading it to co-passengers and others at platforms or stations.   The name of a train whether Rajdhani or otherwise, makes no difference: such train travel and disembarkation of passengers is already causing grave concern in our State, which hitherto was technically in a Green Zone! Unless a train is brining our people back to Goa: people with local permanent residence in Goa (not merely holiday home in Goa or even a business interest or business address) and who were genuinely stranded out of Goa, no one should be allowed to enter Goa whether by train or any other mode of transport until the lockdown is lifted nationally- Carlos Alvares Ferreira , Advocate

This is a central decision and trains are running in places where the lockdown is relaxed. The state’s could not do anything. The CM in a statement said that 33 people who tested positive were Goans, I don’t think that is true. They may work here but they may not be Goans. The people travelling by train should be tested at the start of their journey. If they are tested here and they are sick, the onus to cure them falls on us- Meenacshi Martins , Actor and social activist

The reason behind opening the rail route was to help people move back to their hometowns. However, with Goa being in the green zone, it also makes it attractive for many people and families from other states to move in for short stays or to seek refuge during this period. This also opens up the risk to spreading the virus through unsuspected individuals who may already have contracted it. And this could make it vulnerable for the state which may even move back into an orange zone. Given the limitations within the state it makes the whole idea questionable- Vikram Verlekar  Jeweller