ISL this year: The beautiful game &its tech inspulired fans

Empty stadiums are not great incentives for sporting action but this year with the virus running riot, the beautiful game will be played without spectators. However the organizers of the ISL are utilizing digital technology to ensure the experience for everyone is enhanced. Café spoke to fans to understand how they intended to experience this season. 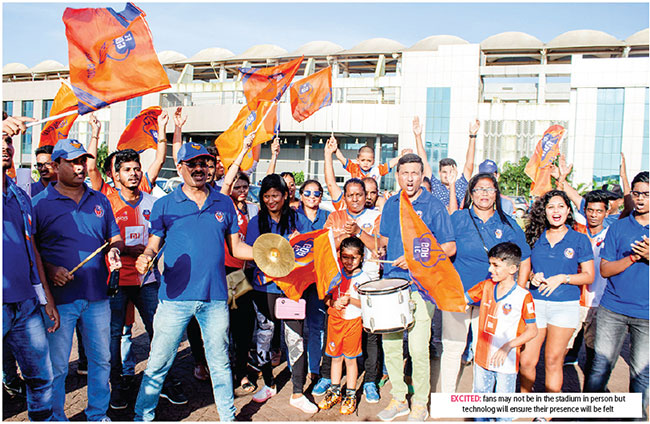 This year has seen several firsts. Indian weddings with guest lists that did not exceed thirty guests, Hindi films being premiered on digital platforms and yes sports events being conducted in front of empty stands. Various leagues have been commenced with matches being contested in empty stadiums. Now the ISL commences following similar protocols. However like some of the top leagues in the world, there will be an infusion of technology to bring the spectators close to the action. The creation of a 'Fan Zone' by the broadcasters has given fans a unique opportunity to be part of matches virtually. Fans will have to register on the website and have a chance to be featured on the 'Fan Walls' in the stadiums. Technology will play a huge role this year as the game will be contested sans the vociferous Goans fans in the stadium.  One of the fan groups who call themselves the Gaur Army has over 14500 followers on Instagram, Facebook and Twitter handles across Goa and several countries including U.K, Australia and UAE with football buffs following them closely. The general feeling amongst fans was the closed door ISL would be a whole new experience. Many said they would be tuned to the ISL Fan wall, digital platform formed and tuned to television sets.  Others said they would be making chart paper messages to show their love. Raj Kamat from Kundaim said “The Indian Super League has made elaborate arrangements to get the fans closer to the players the most and we are really excited over the arrangement. The 2 LED screens which will feature fans from home and away and will amplify the rivalry virtually and it will be an exciting experience to all of us”. A die hard Football Enthusiast from Panjim, Ashley PO said “This is it is going to be closed doors but we have set plans to support the gaurs from Home. The ISL fan wall online digital content like mix of cameras covering the players by league organizers will help us track every movement of the Gaurs. I am personally looking forward to also interacting with football experts during the pre and post match shows”. Savio Mesquita from Panjim felt the use of digital technology would ensure fans did not miss out on the action while also ensuring the essence of the game was not lost. He said “ The innovative fan walls and an array of additional cameras on the field of play will bring fans closer to the game The Gaur Army has taken steps to reach out to fans and also hold exciting contests to be played online on its social media handles”. Fans are watching from all over. Malcolm Fernandes who lives in England felt Goans living abroad could get closer to the action with innovative concepts like Live Digital Platforms and watch the game along.  He felt the expert opinions and interactions with other fans would add to the excitement and also create a module for other sporting events in organising sports events in unprecedented times. Faizan Khan from Saudi Arabia said he would be watching the games online through the ISL app. he said “The league along with the club has given opportunities to connect online so that the fans across the world don't miss out any action missed, the world has transformed into a era of digital, our meetings, work places and everything is changed so has the sports arena”. To sum it up founding member Sidharth Mehta said “As football Fans who have travelled the length and Breadth of the Indian Sub Continent following the FC Goa Team through good times and bad, this was surreal. I believe what defines our Supporters club is how we are valued by the players we support. Despite the ISL season 7 being held behind closed doors Virtual ISL Fan Wall, Zoom Calls, Activation sessions and much more will be organized to keep up the momentum of the fan support for the team as a whole”. One can only hope at the end of the season, there is one team on top ie FC Goa.