Increasing surveillance to protect our monuments

In a bid to protect the historical monuments from being defaced and encroached, the Directorate of Archives and Archaeology is contemplating installing closed circuit TV (CCTV) cameras at all 51 sites as part of its long-term initiative. Will this alone help in preventing defacement of the heritage sites or should there be some additional steps that need to supplemented with installation of CCTV cameras? 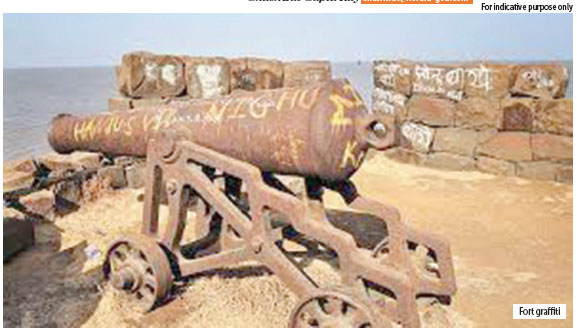 Defacing of historical monuments by visitors is a big eye-sore for heritage lovers and leaves a poor impression about our rich historical legacy in the minds of foreign tourists.

With an aim to curb this menace the Directorate of Archives and Archaeology is contemplating installing closed circuit TV (CCTV) cameras at all 51 sites as part of its long-term initiative. While this decision was welcomed by historians and conservationists, but according to them, this alone won’t help in achieving the objective.

Former Director, Monuments and World Heritage, Archaeological Survey of India, Nizamuddin Taher welcomed the step. “CCTV is needed to monitor the activities at the site. However, we need to have awareness campaign to prevent defacing of monuments and historical sites. We can add a small slogan on the advertisement signage of the Tourism department of Goa. It would have a wide impact,” Taher said.

“CCTVwill record what has happened. But we need to take steps after it has happened. So, a multi prong strategy need to be adopted. Apart from CCTV, there are three aspects we must focus upon. One, we need to penalise the culprit as per the provisions of the Acts for defacing and penalty be collected.Two, if it's a serious infringement with an intent to vandalise and destroy the structure,then FIR is to be filed under relevant provisions and legal action be initiated,” he said.

Suggesting the third step, the former ASI senior official said that if the artefact or the monument suffers physical damage, then first studythe degree of damage done to the structure and file a critical inspection report. After this, conservation be carried out.

Architect and conservationistTallulah D'Silva said that while the plans to install CCTV is an appreciable step, where these cameras will be installed on a protected site will be a concern.

“Besides this, there needs to be a number of supplementary actions that will help the initiative. Creating awareness using social media, informative walks and experiential tours in the area will bring concern and support,” Talluah said.

According to her, engaging young students and local youth will also bring in ownership.

“Training local persons as guides, making local committees as partners will also help increasing vigilance in heritage monument sites. Using alternative methods to replace old ways that cause defacement to buildings could be introduced. There are many examples in touristic cities where this has been done. Taking pictures with placards, I love this monument signs are quite popular,” she said.

Convenor of INTACH, Goa Chapter, Fatima Da Silva Gracias welcoming the decision, said that this is a good step. “We need to wait and watch the results of installing CCTV cameras. After that only we will know if there is any follow-up action is required or not,” she said.

Historian Prajal Sakhardande said it is a very good step taken in the direction of saving the monuments. “Lot of things happen at the sites. People litter the place, organise parties, break bottles, draw graffities on the walls and rocks. All this can be prevented if when these acts are captured in camera. The images recorded in camera can be used as evidence for prosecuting the offenders,” he said.

“We also need 24x7 watch guards at the sites. There is so much unemployment. We can easily employ the Goan youths from hinterlands and employ them as watchguards,” he said.