It’s all about the Beautiful Game 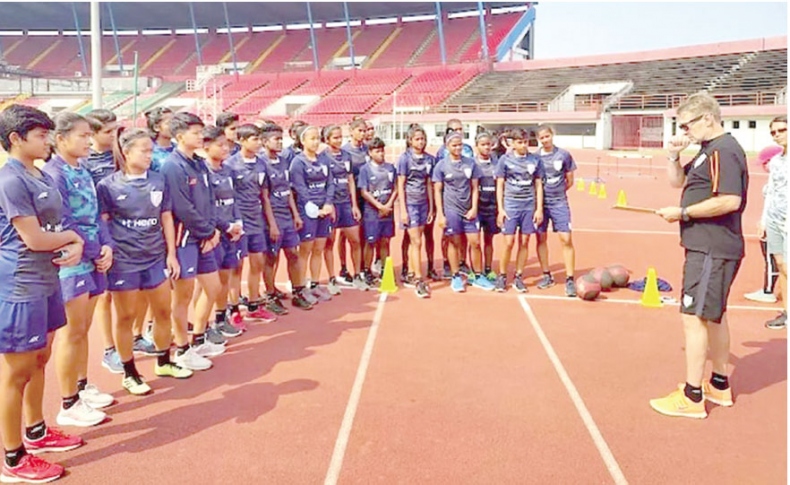 As football booms the world over, Goa will not be left behind. The best of teenage girls’ footballers in the world will be in action in the state which hosts two groups of the FIFA U-17 Women’s World Cup. They will don the colours of Germany, Nigeria, France, Japan, Chile, New Zealand, Tanzania and Canada.

Nothing touches a Goan’s soul more than a beautiful goal scored in a victory or a heartbreaking loss. The game simply runs in the veins here. Not surprisingly, the youth in Goa are all excited by the prospect of a world tournament of the sport that they play in the backyard.

Chrisneil Dias, a fan, said it was great a tournament of this stature for women is being held in the country. He said, “Youngsters are very enthusiastic ahead of the upcoming tournament. Many are planning on going to the stadium and watching the matches. Brazil undoubtedly has a lot of support among the youth and many are keen on following closely how the South American nation will fare.”

“Spain also has much support here. I hope our Indian girls perform well by giving a tough fight. Like many others, I feel Germany will win this women’s U-17 World Cup.”

There seems to be growing anticipation over the prospect of watching Brazil play in Goa. Kunal Kunkolienkar, an FC Goa fan, said he was excited and looking forward to viewing the U-17 Women’s World Cup in Goa. He said, “It will be a much anticipated return to the stands for the fans and I’m eagerly waiting for the tournament to kick start so that I can attend matches at stadiums after a gap of two years. However what excites me most is the prospect of watching the Brazil vs USA match. I feel it’s going to be a good match as two strong teams will be facing each other. I’m rooting for Brazil to win the tourney, I’ve always been a huge fan of the way they play football, be it the men’s team or the women’s team. Let’s go Brazil!”

Brazil seems to be the team to watch for Presley Goes too. He said, “I am very excited about the U-17 FIFA World Cup happening in Goa and also will be going to see the matches live at the Fatorda stadium. My favourites are always Brazil but I hope India performs well and moves ahead on the international stage.”

Confidence in Brazil may be logical based on the performance of its men’s and women’s team. However at the U-17 level, Brazil has not done anything of note in the last six championships. Yes, they qualified for the quarterfinals on two occasions and were eliminated in the group stages on four occasions.

Spain are the defending champions but the country to have won the maximum number of titles at this level is North Korea who won the title on two occasions. But they won’t be present here, having failed to qualify.

Omi, a fan of FC Goa, however preferred to root for India. He said it was a matter of pride that such a tournament was taking place in the State. He went on to say that it would be great to watch teams like Brazil, England and France play and get an early glimpse of future stars but he would be focused on the Indian team.

Omi said, “Our women’s team has been giving very good performances around the world and I am sure the juniors will be enthused by this. I really hope our girls do well and progress in the tournament. I hope to see as many matches as possible”.

Fans like Clesito Fernandes intend to travel from Mumbai to watch matches. It also brings back pleasant memories having volunteered during the FIFA U-17 men’s tournament held in Goa in 2017. He said, “It was quite an experience being part of the volunteers but now I will be in the stands watching the tournament progress as a fan. I will watch both quarterfinals. It should be an exciting experience.”

Conrad Barretto is helping out at the stadium. He said there was undoubtedly a great deal of hype building up for the U-17 World Cup. He said “People have been calling for volunteering positions, passes etc. A lot of fans have also brought an eight-day venue pass. Fatorda will be the place to be. Some of the best teams like the USA, Japan, and Germany play their group-stage matches here. Plus in addition to two quarterfinals, we have both semi-finals in Goa as well. So, whoever the champions, they will have definitely played in Goa.”

The tournament kicks off on October 11 with the opening matches between Brazil and Morocco and Chile and New Zealand. In Goa that very day Germany will play Nigeria which can be expected to be a tough physical encounter.

Yes, the excitement is gradually building. Once the referee blows for the kick-off at the Pandit Jawaharlal Nehru Stadium at Fatorda, the buzz will grow to a crescendo on semi-finals day on October 26. The winners would then proceed to Navi Mumbai for the final on October 30.

Goan fans, we expect, will have had their fill and their exuberance and support for the game are likely to strike a chord with the competition’s young players, many of whom could well blossom into global stars in years to come.