It’s time for a boost to the bottom-line

Election time means certain businesses like printers, agencies dealing with hoardings and other services receive a boost. With elections scheduled to be held sometime early next year, some action has already commenced though on a low key basis. People involved in the industry talked about the business 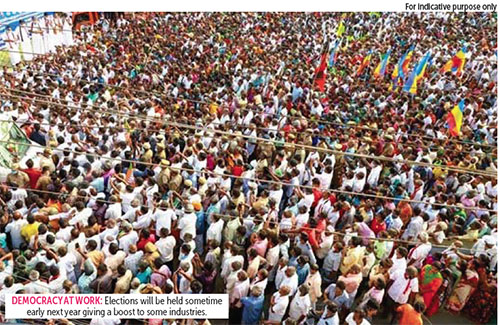 The Indian election has been called a festival of democracy. It is without a doubt the biggest such exercise in the world. Come next year, Goans will have an opportunity to vote in the elections which are expected to be held in the first half of the year. Elections are an expensive affair. Apart from the candidates who are the main actors, there are other players who work in the background to ensure everything works out fine. There are industries that receive a boost in earnings whenever an election comes around.

It could be a restaurant that provides food for the guests who come visiting at the candidate’s house. Sometimes late night meetings may require food orders to be placed at short notice. Or they could be printers, suppliers of audio and video equipment or agencies that handle hoardings. Elections result in a dramatic surge in the design and printing of publicity material. Numbers can run into lakhs and publicity material has to be created at short notice depending on the changing situation on the ground.

Sayed of Classic Printers said he expected business to come before the elections like it did on previous occasions. He said he would get business from all the parties and since it was all in bulk, it would be done on offset. Fliers, he said, were also printed in large numbers. It was, he said, great for business. He said they would take business from whichever party that approached them. He said usually parties look to their volunteers to get the job done because as Sayed said someone or the other would have a printing press and it would get done there.

Milind Mahale from Rachna Advertising that handles hoardings around the state said they were presently booked out. 50 percent of his hoardings he said were taken up by political clients. The greatest fear for companies doing business with the political class is the fear of nonpayment. Milind said they did not conduct any such business directly. They had sub contracted to agencies which guaranteed them clients and importantly payments at a schedule which pleased them. He said “We have 130 hoardings around the state. The small agencies sell these hoardings to their clients. We get the rates we want and we are happy with the business. Now with business picking up we can also expect business from the hospitality industry. Then there is Diwali, all the brands will come out with schemes.

Another prominent player in the business is Keith Fernandes of Slip Disc. He said business was just picking up and there were a lot of political campaigns. He said “We get all this business through an agency based in Kolkatta. We have the TMC business and we have a fixed rate with the agency. We get our rates. We know whenever we deal with an agency, payment is guaranteed”. He said they worked with all political parties. He said the parties worked with various vendors. He said bookings could change depending on changing situations. The agency from Kolkatta had taken 8-10 hoardings for a month and that could perhaps reduce. Business he said was not a problem and payments because of the system followed were always assured.

Some businesses however are changing with the times. The days when sounds and lights were provided by an external vendor have generally come to an end. Jiyaz from Raj Decorators said increasingly sound systems would be provided by someone from the group of volunteers who were with every political party. He said “We used to get a lot of work in the past during elections but not in the recent past. They have made their own arrangements. Parties like to have everything under their control which is understandable.”

With the kind of budgets at the disposal of political parties, it can be said none of the vendors will sleep unhappy. One can only wish it is all conducted smoothly and every section of society comes away happy with the experience.