It all about love for the culture 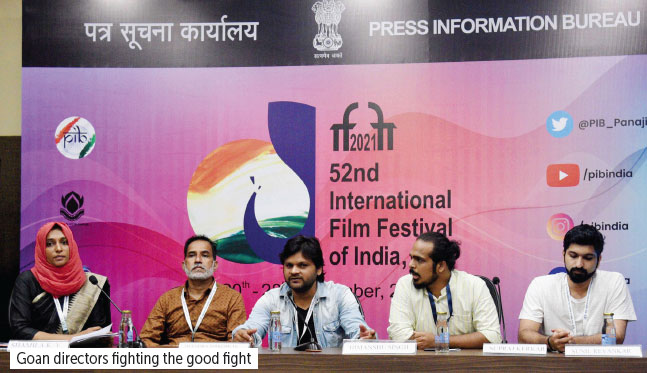 It was a day when members of the Konkani film industry articulated their concerns about making a film in the state. Film Directors Jitendra Shikherkar, Himanshu Singh, Sunil Revankar and Supraj Kerkar expressed their happiness at being selected to showcase their films at the festival. Jitendra however pointed out that none of the producers of his films had made money. Winning awards was fine but producers wanted returns on their investments. He said the lockdown was a very stressful experience but the calmness exhibited by Dr Pramod Salgaocar the producer was reassuring.

Himanshu Singh who made Kupamcho Daryeo a 19 minute film about a couple saying goodbye to each other and may never meet again said he had shifted fourteen times in his childhood due to his father being a government servant and gathered memories over the years. It was always decision time as to what to keep behind and what to take while moving on. He said he made the film to also show that there was more to Goa than just beaches and the fact they were at IFFI was a great boost to the team. He said it was great to be able to make a film in Goa and to have an international platform to showcase one’s ideas.

Sunil Revankar who made Paul 10 a story about a young aspiring footballer who is great fan of a female football player and wants to be part of the football team but has his dreams crushed when the association found his name with an NGO for transgender. Sunil said he came across the incident of Dhutee Chand who had the medals won stripped off her after it was found she was transgender. He said she had still expressed her wish to run for the country and he questioned why the community had to undergo such humiliation. He said it was a sensitive topic and he conducted research. When he was informed his film had been selected for the film festival he said it made him very happy. He went on to say Goan film makers would have to work hard and improve and be so good that in time when filmmakers from the rest of the country and the world would learn about Goan film makers being present with their films, they would experience fear.

Jitendra said to make a Konkani film was like putting one’s hand in the fire. Everyone did it for the love of the language. People loved the language and that’s why they made movies. No one made money on these movies. He said everyone was looking at OTT platforms but it was a tough process and it was pointed out on domestic platforms, Konkani was not even registered as a language by itself and was bundled with Marathi. The schemes under ESG have not been operational for a couple of years making the situation even worse.

The film screened at 52nd IFFI under the Indian Panorama Feature film section, revolves around a young boy Sijou of Saikhong Guri village, near Indo-Bhutan border in Assam. His life takes an unfortunate turn when he becomes a victim of the feudal land tenure system. The subsequent turn of events turns the boy into a monk.

Addressing a Press Conference today, the Director of the film Vishal P. Chaliha said, “When I think of slavery, the picture of Africa used to come to my mind. I never knew that slavery was also prevalent next to my home.”

He said that when the Producer came to him with the concept, it touched him at once and he made up his mind to make the movie. Talking about the preparations, the Director said that he went to Bhutan and all the bordering villages, and interacted with the people. “There was no written record available on it. It all existed only in the minds of the descendants of the victims of this brutal feudal system”, he said.

He further said that it took around six months to complete the film. The team stayed in Bhutan and the bordering villages to do the research. “The descendants narrated the story very beautifully, because of which I could form a good script”, he added.

Cinema showcases the harsh reality of life and to make such cinema can take a lot out of you either monetarily or emotionally. For some the process of making it can be stressful and for others the experience of showing a mirror to the cruelty of man can be quite an experience.