It is just not festive for them

This is the season of festivals. Everyone seems to be having a great time with all the noise and the sweets but for our pets and the other animals living around us, it is a terrible time. Pet owners and those involved in caring for animals had much to say about the plight of animals 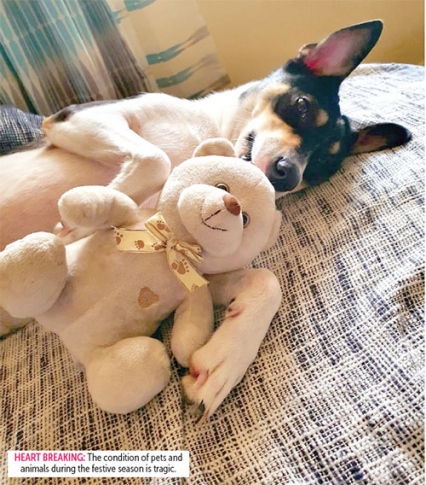 The season for celebration has commenced. Yes, yes the virus is still wrecking havoc but people are still finding ways to celebrate. Sweets, meeting with relatives and yes crackers are burst with great enthusiasm. This is a common template across the festival season in the State. It is great times for everyone, or is it. Our four legged and two legged furry friends hate it. Much more sensitive systems mean they are generally terrified of the festival season.

Beverly Mendes a financial consultant works out of Mapusa. She now takes her dog to the office. Beverly said “Firecrackers scare her. She has been hyperventilating. I thought she would have a heart attack. She was shivering. Otherwise she is a calm, cool and collected dog. She is two years old and she was very young when Diwali came around and she slept through it. Now she reacts adversely to it. I thought she would get better with age. Crackers were burst right through the night.”

Kezer Godinho who has a dog said his dog was very scared about the entire situation. He said “Now she walks towards those bursting crackers and starts barking which is equally not advisable. Earlier, she was very sensitive and rush under the bed. Now we sit next to her and comfort her. We hold her; it is scary so we have to be careful.”

Shloka Nagwekar an architecture student based in Margao, felt strongly about the traumatic effect on the animals. She said “When the entire country is celebrating the festival another small part of it is suffering badly from it. Lighting of firecrackers does not only create a fear among pets but causes temporary deafness in many animals; it can also lead to disorientation along birds. On a higher extent it sometimes can lead to permanent deafness as well. I have a pet dog too and I have seen how scared she gets hearing to the loud noises of the fire crackers. She immediately hides under the table and does not eat anything after that. It takes us so much of trouble to calm her down, pamper her and make sure she is fine. Most of the pets start acting abnormally after the fire crackers being lit”. She said she was not completely against the use of firecrackers, but since prevention was better than en cure, everyone could do their best to save their pet friends. Firecrackers, she said did not stop after chaturthi and there were many more other festivals being lined up. She and her family had stopped using firecrackers and they also let stray dogs in the area sit in the compound to make them feel safe and homely. Sholka said “I am very attached to dogs and I have seen the worst of them cry and run around being helpless not knowing what is happening and I don’t want the rest to suffer the same. It’s very sad to see our next friends getting treated that way. Me and my family have been doing our bit to keep the environment safe and sound for pets. And so you can too”.

Conrad Pinto an artist by profession who loves dogs said his dog was terribly frightened of loud sounds. He said “You can see them shiver, some hide. Dogs run away from home and are lost. This is all due to the crackers. They get lost and we have many cases in Aldona. Many never come back. It is really sad and after the festival, we see some dogs return.”

Anu Holst a communication consultant who has a dog and a couple of cats said “My dog, does not like the sound of fireworks. She hides behind pillows or beds, runs around the house barking at the sound and more often than not refuses to go for walks either. My cats prefer to stay in and don’t leave the house at all. The only way to counter this at festival time is by putting on the TV loudly to drown out the sound of the crackers. As much as we love festivals we need to consider that this effects our four legged friends a lot whether they are on the street or in homes”.

Dr Aparajita Choudhary a vet said several of her patients were experiencing tremendous stress. Some of them she said were on sedatives. The sudden high pitched noise was detrimental to their well being. Many, she said were not eating and were just not feeling right. She said many practically have to take an anxiolytic which was a stress relieving drug. She said “I see a lot of dogs being brought in. this is the start of the festival season so one can only imagine their state. This is the time when many of them run away from homes in extreme distress and then after the festival the dog lovers network start co-coordinating and assisting in finding dogs and repatriating dogs to their owners in different parts of the state.”

Benhail Antao a wild life conservationist said he hated fireworks. He said “I have been vocal on social media. This is sound pollution and is a shock factor for the animals. Pets have a very sensitive system as compared to a human being. They depend on their senses. When we shock them they can be knocked off their senses. We have also used loud noise as entertainment, it leaves them disoriented. I lost my dog and we found him 7 months later. He died soon after due to all the food he ate on the roads. For rodents, squirrels it can be even worse. Many even die due to the sound waves. Birds are resting at night and fireworks are let off at night. It is a dramatic shock to their system”.

Perhaps it s time we learn to become more sensitive to our surroundings and think about the other beings living around us. Perhaps that will make us more human.