It was very logical to have it in Goa: Sumant Batra 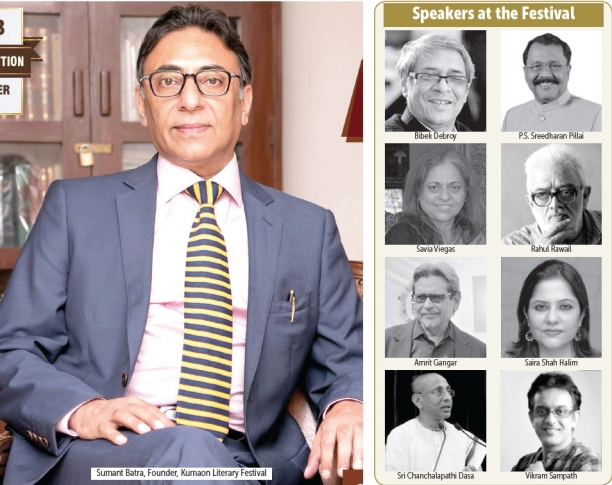 He used to be a corporate and policy lawyer of Global eminence. Ranked as the country’s topmost lawyer, he has now brought his baby to Goa. Sumant Batra is bringing India’s only travelling literary festival, the Kumaon Literary Festival will be held in Goa over the weekend. This move he said to take it from its place of origin in Uttarakhand where it was held in various locations like Dhanachuli, and also at Nainital, Jim Corbett National Park.

This move to Goa seems to be the obvious move considering he has residence in Devar and will be shifting to Goa in September as he enters a different chapter in his life. He said “We decided on Goa for two reasons. Firstly, the foundation meaning the Indian Cinema and Heritage Foundation which runs the Kumaon Literary Festival is relocating to the Divar island in Goa. Then you have to remember that being an author myself and having been very active in the cultural space over the last seven-eight years, I believe Goa is perhaps the most ideal destination to do a literature festival. The people here take pride in cultural activities and spend time in attending festivals.”He also pointed out the fact that what set this festival apart from the others was that it was an institutionalised festival. In Goa he said there was a hunger to see and learn new things which was absent in the bigger cities. He pointed out that in smaller places there was genuine interest in these kinds of festivals. People there felt he still read and wanted to meet the authors. This was due to the fact he felt that parents inculcated in the children the importance of reading and its benefits. It was also he said a leap of faith also dictated by the fact that he loved Goa. Sumant felt in the bigger cities, kids were getting distracted t just like their parents because there were so many distractions and too much of supply in the sense of too many such events, whereas in smaller towns there was humility in terms of people wanting to learn and interact. He expressed the hope the festival would be as well attended as a musical festival.

When asked about the importance of a festival of this nature where ideas were discussed without inhibition in a time where there was growing indication of a squeeze on free speech, he said he had not experienced pressure from anyone in the government to go easy. He said “I believe everyone should have the right to present their point of view. I have speakers from both sides of the aisle who will present their points of view. We need discussion and debate”

He hoped schools and colleges would attend in large numbers because it would expose them to new ideas and thoughts because they were, he said at the most impressionable age and it was important to be open to such ideas. Sumant said he was very happy when he learned the CM was keen on making the state the tourism capital of the world, he felt that could be done by holding such festivals in the state. It would add a certain intellectual gravitas. Now with around forty two authors coming and six books being launched, he said it would be a very good experience. All this he felt would help the cause of Goa to become the tourism capital of the country.

The two-day festival will be inaugurated by Shri P.S. Sreedharan Pillai, the Hon’ble Governor of the State of Goa on the 14th and will feature various sessions on art, cinema and literature highlighting aspects of art and culture.

This year’s festival aims to bring together creative minds to offer insights on matters relevant to literature and culture.

Each year, the festival promotes art and world heritage with numerous innovative initiatives. This year, the festival will have eminent speakers like Amrit Gangar, film historian and writer, Anant Vijay, senior journalist and author, Rahul Rawail, film director and writer, Milee Ashwarya, publisher, Ebury Publishing and Vintage Publishing at Penguin Random House India, His Grace Sri Chanchalapathi Dasa, Senior Vice-President of ISKCON, Bangalore and Vice-Chairman of the Akshaya Patra Foundation among many others. Mr. Bibek Debroy, Chairman, Economic Advisory Council to the Prime Minister of India, will also be giving the keynote address on ‘Translating the Ancient Text: The Place of Mythology in the Popular Consciousness.’.

The approach towards the festival is aimed at maximizing the impact, optimizing on the resources and ensuring measurable and tangible outcomes. This event will bring together writers, historians, artists, literary pioneers and prodigies from around the world. Celebrated authors like Dhritiman Chaterji, Kiran Manral, Jerry Pinto and Gautam Chintamani will also grace the event with their presence. Apart from these, several key current and former bureaucrats and domain experts will be present at the event and participate in discussions and launches of books including ‘Tijara Mystery Codes by Hemma Myers Sood’, ‘Remo: The Autobiography of Remo Fernandes’, ‘Sing, Dance and Pray– The Inspirational Story of Srila Prabhupada by Hindol Sengupta’, ‘My Name is GauharJaan!: The Life and Times of a Musician by Vikram Sampath’ and many more.

India has been a global hub for arts and culture for centuries; the setting and inspiration for celebrated works of literature, drama and art, and home to artists and writers from around the world. KLF brings together brilliant and unique minds from various genres of the creative world. Artists whose work is considered credible, reliable, and honorable get together and through their discussions provide guidance and enriching insights to those who are most receptive; our youth.