It will be a tough battle ahead

FC Goa is the only team from India competing in the AFC Champions League, the annual intercontinental club championship from Asia by being the league winners of the ISL in the last season. They face very tough teams from Iran, Qatar, UAE and Iraq in the AFC this month. As part of Cafe’s regular engagement with Goan football fans, they speak on their expectations from the Guar army 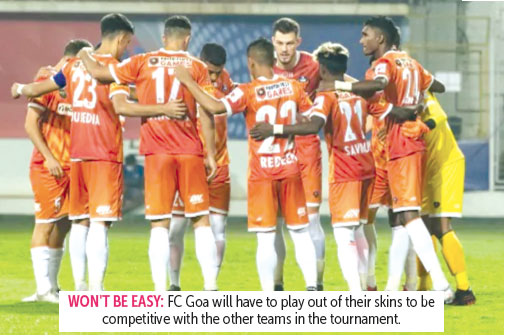 FC Goa can win against these teams if they play to their strength that is keeping possession and trying to sneak goals here and there. It won't be easy for sure but we can be confident with players we got FC Goa can defeat them. FC Goa will be used to this weather and that can be a vital factor in this AFC Champions League. We have seen how players have struggled to cope with the weather here in India. This is the biggest advantage for our team.

Having high expectations is good but we also have to be realistic about our chances in the AFC Champions League. We recently saw how the national team played against the UAE in the International friendly which also highlighted the gap which still exists.

The AFC Champions League is the pinnacle of Asian club football which is equivalent to the UEFA Champions League for Europe. I think what we can do is keep our spirits high to support our boys in this historic achievement for an Indian club. Whatever comes out of the tournament will be a great learning curve for Indian football to move forward. I'm proud being a Gaur and FC Goa will always be remembered as the first Indian club to have ever taken part in the AFC Champions League.

The FC Goa Fan Club will always keep backing the boys and I dearly hope we cause an upset or two.

Representing the nation at this level in itself is a great achievement. The style of play is very high as compared to ISL so that competing at the highest level will give a boost to the confidence of Players. Fc Goa stand a chance but they need to be tactically disciplined.

Its history in the making as FC Goa becomes the first Indian club ever to participate in the AFC Champions League. It is going to be very tough for us I feel that we should go all out and fight for wins rather than just controlling the game. Apart from a few experienced local players we definitely have the foreigners who have played at an equivalent level in their careers. I know many would say that my expectations are too much but then you don't go into a tournament and play thinking that you are not good enough. All the best FC Goa. The FC Goa fan club will always be behind you.

Most people who have not seen the level of Asian Football especially the AFC Champions League. There's hope that FC Goa does well and progresses into the next round but realistically that is going to be very tough. But I do hope the weather and the conditions are in favour of FC Goa as they will know it better than any other team. If heat and humidity plays a part then definitely we can give a tough fight to the opponents.

It's sad that we cannot provide that extra bit of motivation from the stands to our Gaurs because of the current situation but we will do our level best to make the team feel our energy behind them. I have full trust in Juan and the team to be competitive in the tournament.

It will be a difficult task for FC Goa against such tough teams. It will however be a good experience for the entire management and players. I think to get better results out from the AFC champions league FC Goa will really need to be strong defensively. Because teams in the AFC champions league will punish you for any defensive errors. I'm looking forward to a fruitful campaign, hope the team continues to play in the similar style (Tiki-Taka). All the best..!! FORCA GOA

FC Goa playing in the Afc Champions league is definitely a very proud moment for us, as FC Goa Fans. However, playing against these high profile teams is going to be challenging undoubtedly. Defending set pieces is an area where FC Goa needs to work on. Also capitalising on the opponents mistakes and improving player communication at the back is a must. In this manner we can give the opponent teams a tough fight and try to win games. We believe we’ll have our chances coz in ‘‘Fernando We Trust’’