It's fine to impose 10k for beach drinking bit who will.impose it?

A fine of Rs 10,000 will be imposed on groups drinking alcohol on the beach. Who will enforce it and collect the fines and will anything come out of this. Café spoke to people in the business to understand what the general feeling was. 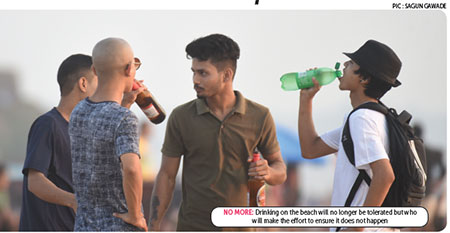 The Goa tourism department has pirpotedly decided to now get strict and implement a law that was passed in 2019. Now anyone found drinking on the beaches of Goa will be fined Rs. 10,000. This follows media reports that slammed the authorities for the appalling mess left behind by tourists who visited the state during the Christmas and New Year weekend.

The state government had amended the Tourist Trade act in January 2019 now imposing fine of Rs 2,000 for individuals and Rs 10,000 for groups drinking on beaches. The state   Tourism Director Menino D'Souza said boards cautioning people against drinking on beaches were now installed. He also revealed the tourism department would enforce the amended Act through police and once they had their tourist police force they would be able to do it on their own.

Menino D souza said “The notifications were issued two years ago and the responsibility for enforcing this is with the police. They are a government body and can issue challans. No one else can. A proposal is in place to set up a force for the tourism industry. It will happen, of that there is no doubt.”

The regular police have always complained of a shortfall in staff and found it difficult to police the various beaches. Meninio said “Only a constable or above can issue a challan and it has been happening. Various tourists have had to pay the fine. ” He however was unable to provide information as to how many were challaned.  Atrempts to speak tothe DGP Mukesh Kumar Meena proved futile.

The general feeling was that it was a very good idea but the million dollar question was if it would be enforced. Savio Messias, Hotelier and former President of TTAG smiled and said a similar legislation banning the cooking on food on the roads or beaches was passed in 2019 and everyone knew what happened with that. He said “Having the laws in place means nothing if there is no will to take action.  Unless you have enforcement authorities in place it will be a waste of time. I think powers can be delegated like they did with traffic sentinels.

Another body which has a front seat view to the situation on the beaches of Goa is Drishti Life Saving Pvt ltd. The lifeguards are in the front and centre in the effort to make it safe for tourist. Ravi Shankar Govindu  Executive Director said historically fines were never a deterrent. It was important; he felt to have a two pronged approach. Ravi said “We need fines and a robust public messaging system. With regards to a monitoring force I feel we should have a tourist warden system who will take community ownership. The local panchayat needs to get involved. Please remember when you fine someone you need to have a big administrative system in place backend. The paper work that is generated is phenomenal. We need the manpower in place”.

Many tourists, both domestic and international frequent shacks and some are known to buy alcohol and walk around on the beach. Cruz Cardozo, President Shack Owner’s association said it would all depend on who was enforcing the authority. He said “If the authorities want to ensure it does not happen, it will not. I feel the police should at least be present at the entrance to the beach and they can keep an eye out as to who is bringing in bottles. They can post at least one policeman who can keep a track”.

Serafin Cotta, President of the Medium and Small Hotels association said the move was good because it would ensure people would drink in outlets meaning the economy in the area would benefit and the government would earn vat. The marketing of the state he said had to make it clear that no one minded tourists drinking but there was a way of drinking and drinking on the beach was certainly not accepted.