Suyansh Prabhudessai is now part of the RCB family and will play in the IPL this year with teammates who are superstars in the sport. Café spoke to this Goan barsman about how it all felt and also got reactions from a few Goans who were very excited. 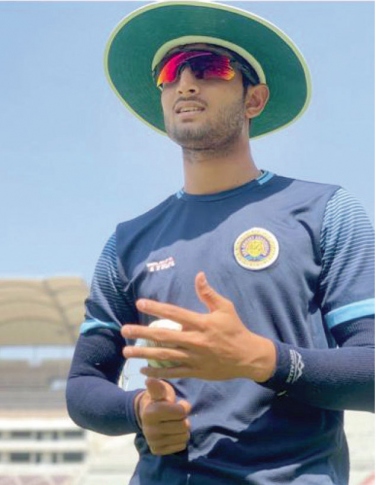 It was news that surprised a lot of people. It was something that had not happened for a while. A young Goan cricketer was selected by RCB to be part of their campaign in the IPL. Suyash Prabhudessai a young batsman who is part of the Ranji Trophy team made into the most prestigious IPL tournament, the gop T20 franchise league in the world.  Speaking to Café from a hotel in Surat he said it had been quite a journey for him having started playing the game at seven. Anyone starting young in a sport is usually motivated by someone older. In his case it was his father who was a cricket fanatic. His father was a huge fan of cricket icon Kapil Dev and wanted his son to follow in his illustrious footstep. Suyansh said “My father used to take me to the ground and throw the ball at me and helped me practice”. The fact his father and his brothers had played local cricket around Goa helped Suyansh get more involved in the game. Another important aspect was the fact they had their own cricket club known as Tarvalem Cricket Club. His uncle Sandesh Prabhudesai was the President of the club. As he got older he started liking the game and the fact that he had watched Sachin play motivated him further. He was coached by Sandeep Naik when he turned ten. He considered Sandeep the best coach in Goa who helped him understand the game better by exposing him to its various facets. His parents played their role in helping him achieve his dream. His mother who is a teacher had to prepare a separate menu for him because of the demands of the sport. He said “It was very tough for my mom who had to also go to school every day at a certain time. But she managed it so well. My father when I was young, used to take me to Margao, Vasco, Panjim wherever I had a practice and then rush again to his office, he did this for 5-6 years. They have done a lot for me, wherever I stand today is because of them.” Being part of RCB is great news for him because as he said the team was his favourite team for so many years and now getting an opportunity to play for them was a dream comes true. He said “Virat bhai is my idol and now I will be sharing a dressing room with him, and then there is ABD Villiers and Maxwell. I have always seen Virat Kohli as the greatest of all time. I love the way he carries himself of the ground while batting or fielding. He is my idol. I consider it as the best thing to have happened to me so far in my cricketing career is concerned.” His team mates in the state team have commended him and this selection will change a few things in his family. He said “My family of course is over the moon and very happy I will be part of the IPL this year but my father is a CSK supporter but he has promised to support me this year. There are also supporters of MI in the family. Bt this year all of them want RCB to win.” His younger brother who used to also play the game decided to give it up to focus on his studies is happy for him because he will be playing with ABD Villers. Suyansh laughed and said “He now thinks I am good too and is a big fan.” Asked how he intended to tackle tasks ahead, he said “I am someone who likes to set small goals and achieve it step by step so now my next goal is to do well in this year’s IPL and make the most use of this opportunity I have got to prove myself”. Asked if he had any message for the youth of Goa he said “Not a message as such, I will just say support RCB and “EE SALA CUP NAMDE.” His elevation has excited Goans around the state. Kunal Kunkolienkar a student from Margao said he was a follower of Suyash since 2018 and felt he was a brilliant talent and a 360° player. He felt he had it in him to play for an ipl franchise soon after he played an important knock for Goa in the recently concluded Sayed Mushtaq Ali Trophy. The opportunity to ply under stars like Kohli, Maxwell and ABD would help his game tremendously. He ended by saying that since Suyash was a hard hitting middle order batsman and all rounder, there was a good chance he would make it into the playing eleven and he hoped he made the most of the opportunity. Sankesh Bhagat a u-23 cricket player in the Goa set up said it was an incredible feeling that a cricketer from Goa has been picked for the IPL after some period of time. He said “Suyash has been very hardworking and deserved a place in the IPL. It is one of the biggest platforms for aspiring cricketers. I hope more cricketers from Goa could make it to such bigger platforms to showcase their talent”. Perhaps he could be the start in the recruitment of more talented young Goan cricketers to teams in the IPl after Swapnil Asnodkar (Rajasthan Royals) and Shadab Jakati (CSK).