The Harvest festival or Konsachem Fest is celebrated through the month of August with great enthusiasm. This tradition dates back to the 15th century and though, in present times, the number of cultivated fields has declined, this feast brings people together across all faiths 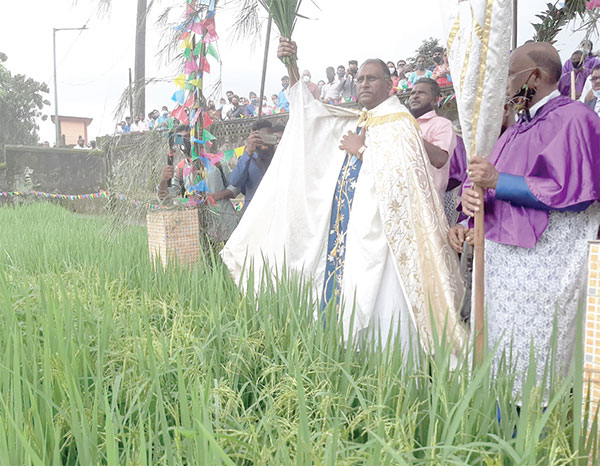 The Harvest Festival or Konsachem Fest is celebrated with great pomp and enthusiasm for centuries. In Goa, the harvest festival is celebrated in the month of August, by which time the new rice grains (konxeo) are formed. The history of this celebration goes back to the 15th century.The feast isn’t celebrated on the same day all over the state. The first village to celebrate the feast, Raia, has festivities on August 5, which is the feast of the patroness of the church, Our Lady of Snows. Vincy Quadros from Raia says, “Raia is famous as it’s the first village to celebrate the feast of the harvest in the State along with the patroness of the church Our Lady of Snows on August 5. In the past, the two feasts were celebrated separately but were later combined.” He further says, “The offering of newly grown sheaves of paddy symbolises the offering of the first fruit to Our Lady for blessings and a good harvest.”The village of Salvador do Mundo in Bardez, celebrates the feast of their patron Saviour of the World on August 6 and also the feast of the Transfiguration of Jesus. Other places celebrate the Harvest Festival either on August 15 or 24, the feast of St Bartholomeu.The Harvest Feast of Taleigao is the most colourful and full of tradition which is spread over a four-day celebration. Fr Cipriano da Silva, the Parish Priest of St Michael’s Church, Taleigao says, “This feast reminds us of our ancestors who had so much connection with the land, fields, greenery and made a great effort to see that these fields are cultivated. Currently, a lot of fields remain uncultivated due to people migrating to other countries.” He adds “Today, we see few Goan workers and the cost of labour is high. This feast reminds us of our obligation to our Mother Earth and to take care of our environment, especially in view of the changing climate”. The history of the feast dates back over 500 years when Afonso de Albuquerque entered Goa. On seeking to conquer Goa in 1510, the Portuguese fleet ran into the monsoon and could not leave the Mandovi River as the exit route was blocked by the sand bar formed at the entrance of Aguada Bay. The stranded troops were forced to take shelter at the edge of the Mandovi River at Britona, the area was a thick inhabited forest in those days. The Portuguese troops eventually ran out of provisions and had to survive on rats. The fishermen from Taleigao, who ventured into the river learnt the plight of the Portuguese troops and the Gaunkars of the village risked their lives from Adil Shahi troops and inclement weather to transport rice and other food stuff to the entire Portuguese fleet in canoes. After successful Conquest of Goa. As a noble gesture Albuquerque gave the privilege to the Gaunkars of Taleigao, to cut the first sheaves of rice on August 21, prior to the other villages in Tiswadi. This decree has been described in the Foral of Portuguese writer Afonso Mexia dated September 16, 1526, Article 54 says “The village of Taleigao has prominence over the others to harvest the paddy. The Gaunkars will come every year with sheaves of paddy stalks to the city of Goa, where it will be presented at the main altar at the Se Cathedral. From there, the vicar will come with them to the Fort where the Factor will present a pachari (a white or coloured shawl), on which he is allowed to spend four Pardaos (currency of the time) to the Gaunkars who have been selected amongst them for this honour. Thereafter, the harvesting in other villages can be effected.”Harvesting is done by rotation, by any male member of each family on August 21. The Gaunkars celebrating the feast are accompanied by a priest, who blesses the new paddy crop, and an entourage consisting of other Gaunkars of the confraternity who carry the image of St Michael on their shoulders from the church to the field where the paddy is harvested. In the past, the entourage used to be accompanied by a group of villagers,dressed fancily and holding decorated bamboo poles. One of them carries the Portuguese flag, according to history which was given to them by Afonso de Albuquerque.On the following day the feast President distributes fov (beaten rice) to nine Gaunkar families living in different wards of the village. This represents sharing of joy and happiness of the rich harvest. On August 23, fov is ceremoniously offered to the parish priest by the Gaunkar celebrating the feast. The grand finale of the four-day festival is on August 24 a committee of Gaunkars carry fov and a sheaf of paddy stalk to the Se Cathedral, where a high mass is celebrated which is also attended by devotees residing around Old Goa. The blessed sheaves are then distributed by the priest during the mass. After the mass, fov are also distributed by the President of the feast to the congregation and the resident priests. Later, the group presents fov and sheaves to the Archbishop at the Archbishop’s House, Altinho, Panjim and to the Governor of Goa at Raj Bhavan. 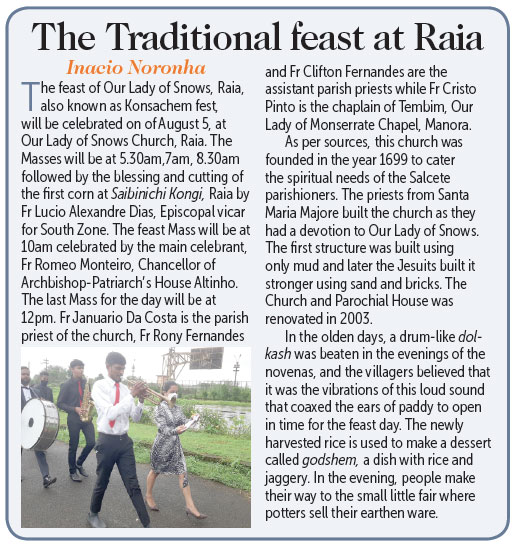