Little action on the annual celebration of lights and camera

The numbers this year of delegates are very low when compared to preceding years but the quality of films being showcased could result in a surge online. Café checks it out. 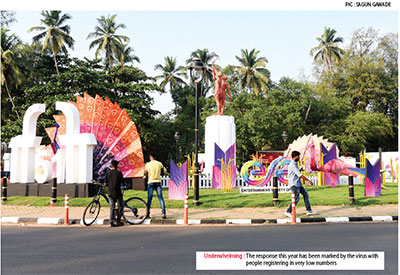 The film festival is just around the corner and Cineaste’s around the country and Goa too are salivating at the prospect of watching the best the world of cinema has to offer. Every year thousands make it a point to make it to Goa. This year however everything is completely different. The virus has ensured that. This year will be very unlike any other year. The crowds will be dramatically smaller. The theatres will be very sparsely populated. Viewers will not be allowed to sit together and watch movies.

Every year the ESG complex will be like the tower of Babel where numerous languages will be spoken. Visitors may not understand each other but they are united by the language of cinema. Visitors come from all the states of India and from countries near and far. It would not be unusual to come across a major cine star from the south sitting and taking in the atmosphere, or that very hard to get director from the Czech Republic tucking into choris pao in a corner of a restaurant.

This year it looks like it will be very different. According to reports gleaned from the organisers, as of today there are just  about 2518 people who have registered from the rest of the country. International visitors as of today numbers 16. There are six visitors from USA, three from the UAE, two from the UK and one from Sri Lanka, Serbia, Nepal and Malaysia.  As far as domestic visitors are concerned, films lovers from Kerala usually make up the largest number of visitors and this year too they make up the largest contingent with 465 visitors at the time of going to press. Goa comes in second with four hundred and sixty four delegates. Delegates are coming from Sikkim number thirteen, Mizoram twelve, Himachal Pradesh two and Uttarakhand one.

A member of the staff who is not authorized to speak to the press said bookings for films would commence online at 00 hours on the 16th. He attributed the low count due to the fear amongst delegates. He however said, they expected the number of people interested in watching online to surge in the days ahead.

This year master classes will be held by Shekhar Kapur, Priyadarshan, Perry Lang, Subhash Ghai and Tanvir Mokammel. There will also be in conversation sessions with eminent film personalities like Rahul Rawail, Madhur Bhandarkar, Pablo Cesar and Anupama Chopra to name just a few.

This year a selection of 23 feature and 20 non feature films will be showcased in the Indian Panorama section. Bangladesh will be country of focus. Films like Jibondhuli, Under Construction, Meghmallar and Sincerely yours, Dhaka will be showcased. Rubaiyat Hossain from that country will be part of the international jury. Others members of the jury will be Pablo Cesar, Prasanna Vithanage, Abu BakrShawky and Priyadarshan. Several films from Marathi cinema and South Indian cinema will feature in the Indian panorama section.

In the international competition section films from Portugal like The Domain from Portugal, My Best Part from France, Dream from Iran and A Dog and His man from India amongst others will compete for the Golden Peacock.

On the OTT platform a retrospective of Spanish auteur Pedro Almodovar will feature his classics like Volver and Bad Education to name just two. Ruben Ostlund will also feature in this section.  Happily two Goan films will be screened. Shinvar a film by Manguirish Bandodkar will be showcased in the premier section and Written in the Corners a short film by Suyash kamat will be in the non premier section.

It may be the strangest film festival to be held in living memory but for lovers of cinema it will be another opportunity to watch some of the more interesting work coming out of countries not usually showcased on the commercial circuit in India.