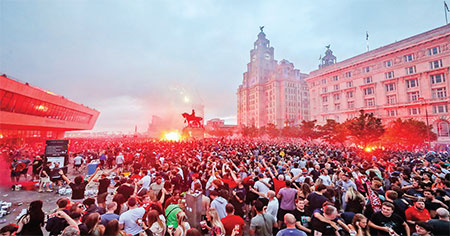 Bottles littered on the streets, firecrackers set off on a building resulting in it catching fire and several fans arrested does not make for very good reading. These were fans of Liverpool Football Club celebrating its victory in the EPL after thirty years

The wait has been quite long, thirty years to be precise. The dam had burst as far as the fans of Liverpool were concerned. It was an occasion to let out feelings, repressed for a very long time. Sadly, it was also an occasion for several fans to indulge in running battles with the police, littering the roads with bottles and setting fire to a building, behaviour totally unbecoming of fans of the beautiful game.

Fans in Goa who are as passionate for the game expressed their shock and horror at the violent behaviour. Savio Vaz an engineering analyst and a passionate football fan felt the club’s fans had completely lost it. He said “It is absolutely shocking behaviour by the Liverpool fans. It looks like the Liverpool team has won the Premier League title but their fans have lost common sense now. We understand winning a title after a long wait of 30 years calls for huge celebrations but not at the cost of people's life. The footage showing bottles and glasses aimed at officers on duty is really shocking, no excuses. Really hope Liverpool fans finally learn to control their emotions and be responsible during their celebrations”.

Another fan felt it was beyond belief that people were behaving like this especially in the time of COVID Tanmay Bhagat said it was beyond belief that despite instructions by the police and the Mersey side officials to celebrate the win with safety the people behaved the way they did. He said “ Fireworks, flares and tons of litter strewn across the city and yes setting fire to a building.  In addition, gathering in thousands and crowd celebrations in this pandemic is not at all right. Risking lives of people when COVID-19 is at its peak without maintaining social distancing is wholly unacceptable”.

Gavin  Fernandes an engineer in Vasco who follows social media quite closely said “Seeing thousands of people congregating at the Pier Head into the early hours and the ugly scenes shared on social media afterwards was heart-breaking to see. Fireworks, flares and tons of litter, amount to nothing but disrespect for the city. This mindless behaviour has the potential to damage Liverpool's reputation – both the club's and the city. I don't believe this is how the team would like their achievement to be remembered”.

For passionate Liverpool fan Siddharth Mehta the behaviour of the fans was heart-breaking. He said “Winning a title after three Decades came like a dream come true. For many, it was a festival of joy but there are always fans who go crazy beyond limits. I being a Liverpool fan would condemn such acts. Each supporter needs to draw a line when they celebrate such historic victories ensuring there is no clash, damage or loss to public property which gets the club in a bad light”.

English football has always had a certain reputation on the continent in Europe due to the behaviour of its fans. Violence was never far when an English football fan was around.  Lengthy bans and the naming and shaming of fans managed to bring about a semblance of order but it seems from this incident that nothing seems to have changed.