Love on the Long Haul 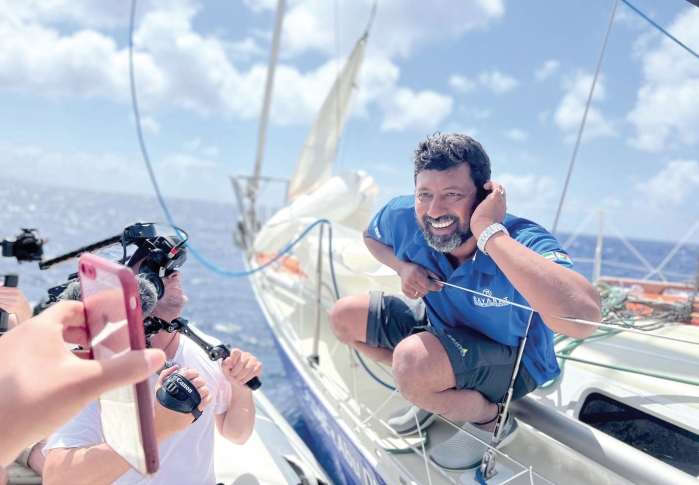 Do you remember, the 21st night of September? In 2018, that’s when overachieving adventurer Abhilash Tomy – the heroic Goa-based Navy man who became the first Indian to sail around the world without stopping in 2013 – encountered “a liquid mountain range” in the Indian Ocean. He was slicing way ahead of expectations in the golden jubilee revival of the epic Golden Globe Race to circumnavigate the planet using only 50-year-old technologies, but now his luck ran out. Giant waves smashed the boat, breaking the mizzen boom (an essential component of sailboat rigging). While trying to recover, the young sailor fell on the deck from several metres up, and found it impossible to stand. His back was broken. All he could do was secure himself, and text an emergency SOS.

Fast forward four years, and the unthinkable is occurring again for Abhilash Tomy. But it’s in the best way possible, because he’s back on the water, competing hard and absolutely determined to conquer Golden Globe Race 2022. After being stranded in 2018, he spent days in delirium, but then came an amazing multinational rescue, followed by months of rehabilitation and recovery. That should have been that – especially considering how tight-knit the 43-year-old is with his wife Urmimala Nag, and their sons Vedaant and Abhraneil – but this is an uncommon man, hard-wired by fate. At the beginning of last year this Navy officer, who is the son of another Navy officer, quit the service. No job, no boat, no sponsor, but Tomy was determined to re-enter the race that almost killed him.

There’s both wonder and shame in how this irrepressible champion finally did get to the GGR starting point in France earlier this month. There’s the distinct element of destiny, an eternal x-factor for voyagers. But right alongside, we must sadly acknowledge how badly India and Indians failed him. Although only four crore rupees were needed – even the 50th highest-paid IPL player earns double – he managed just ten lakhs on Ketto, plus the small support of Jellyfish Watersports, his long-time sponsors from Kerala. However, that same Malayali connection opened an important door in Abu Dhabi, to the artificial intelligence pioneers Bayanat, which is how Tomy is happily flying the UAE flag around the world.

One way to think about what Tomy is trying: over 6000 people have summited Everest, and almost 600 have gone into space, but only 180 have sailed around the world without stopping, and only is Indian. There’s also the sheer singularity of the GGR, which their website states succinctly “the 2022 Golden Globe Race is very simple: Depart from Les Sables-d’Olonne, France on September 4th, 2022 and sail solo, non-stop around the world, via the five Great Capes and return to Les Sables-d’Olonne. Entrants are limited to sailing similar yachts and equipment to what was available to Sir Robin in that first race. That means sailing without modern technology or the benefit of satellite-based navigation aids. In contrast to the current professional world of elite ocean racing, this edition travels back to a time known as the ‘Golden Age’ of solo sailing.”

What all that effectively means is you’re off the grid for eight months. It is possible to communicate through some ship – by the old-fashioned means of hailing and hallooing, or sometimes via radio – but that is hit and miss. This is the ancient way of wayfarers: you go, you’re gone, and everyone prays. But now, of course, there’s an additional twist: you’re retrofitted, but the rest of us are not. We follow in real time, via apps that tell you where each boat is at any given minute. As one of Tomy’s 11.7k subscribers, I also get updates on Twitter, where an unaccustomed – and it has to be said rather pleasantly more engaged – tone has reigned since it was taken over by Urmimala in Porvorim. Earlier this week, when she shared the photograph that accompanies this column, I found it compulsively intriguing: the expression on her husband’s face had so much love and longing, such happiness and heartbreak. It felt essential to find out more.

It turns out there’s video of the incident as well, on the GGR channel on Youtube, and it is from one of just three scheduled rendezvous when competitors can hand over letters and film (remember, only pre-1968 technology) and exchange some words. Here, off the coast of Lanzarote, the easternmost Canary Island, we see and hear an uncharacteristically subdued Tomy: “I had a lot of PTSD. A lot of my dreams were about repairing – banging and repairing something. I couldn’t eat – probably had two or three meals in 10 days – and I can see people about the boat repairing things, and things breaking. It was a bit crazy, and I made a couple of stupid mistakes [referring to backtracking a bit].”

But then our hero perks up, because he has started off quite well compared to 2018: “this is a brand new experience, a fresh experience with a different boat, different sailing. [The last time I was] 10th after 12 days, this time 4th after 20 days.” Switching to Hindi for Indian viewers, he says “in seven months I’ll be back again, and hopefully with the tiranga on the podium. There is hope for that. I have hope (“ummeed”) it will happen.” Then, all of a sudden, perhaps spontaneously, the organizers arrange a very brief video call from Goa. We the light switch on in Tomy’s eyes and face, while his body language crumples to something like involuntary intimacy. Afterwards, we hear an someone ask with a strong French accent: “you look a bit sad, or something.” The Indian responds slowly, “it’s mixed. I’m very happy and very sad”, then peels off fast in the direction of Cape Town.

This photograph and that video – and the entire poignant public exchange they record for posterity – are just tiny indicators of the tremendous costs that Tomy and his family are paying, in order for him to make history and inspire humanity. Because, make no mistake, those are the stakes. It may be true India conspicuously ignored him when he declared his intention to enter the GGR, and is still not paying any real attention even as Bayanat has remained rooted to the leader board, but everyone is going to jump on to this bandwagon as the weeks and months go by, and Tomy exhibits his full mettle: government, corporates, state, nation, CM and PM – it’s just really quite shameful it didn’t happen earlier.

Yesterday, I reached out to Urmimala to find out how she’s coping with the strain and sacrifice, and here’s what she said: “Many people want to laud my bravery along with Abhilash’s [but] I am not brave. He is. He’s made sure we are completely comfortable in all aspects. I have faith in him, as well as the Almighty, whom I pray to everyday to keep him safe and fulfil his dreams. Vedaant has the race app installed on his phone and checks on things every now and then. Abhraneil gets a bit emotional as he misses his dad, so we read some storybooks that are about sailboats and happy, adventurous journeys. You know, Abhilash does not believe in calling things quits. When one is passionate about a goal or aim, the outcome is not always as we intended. And that is okay. What matters is how we pick up the rubble and start afresh. Resilience, is the need of the hour. Finding newer ways to rebuild your strategy, newer perspectives to look at things, should be focussed upon and not the fear of failure.”