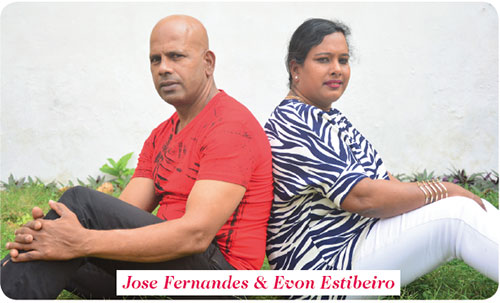 When husband and wife realize and acknowledge their potential on stage as a couple, sailing together turns smooth amidst the rough weather

Jose Roman Fernandes hails from Pedda, Benaulim in Salcete taluka and was born on August 9, 1971. He completed his matriculation at Holy Spirit Institute, Margao and pursued his further studies at Holy Trinity College, Benaulim.

At the tender age of 8, as a child artiste, Jose made his entry in Menino de Bandar’s noted tiatr ‘Sucorine’ (Part II) titled ‘Put Konnacho’. It was a direct hop on to the commercial stage as an actor, a rare feat for the amateurs and that too for a child artiste on the tiatr stage.

Colva-based Evon Estibeiro was born on May 23, 1976, with primary education obtained at Infant Jesus High School, Colva. Her involvement was always there in cultural programmes, be it in school or in the parish.

Evon participated mostly in one-act plays held with the village folk during the Christmas season. “During that period every parish across Goa would organize one-act play competition (intervillage and at the state level) and the village youth was actively involved in this cultural activity,” she added.

Evon’s entry on the commercial stage came about as a substitute in Mini Mario’s tiatr ‘Patang’ as a comedienne, followed by folk plays (zomnivhele fell) by Jolly Boys, Pedda. She was part of that troupe for almost 5 years. It was at this juncture that Evon encountered Jose and brushing shoulders in ‘zomnivhele fell’ as artistes turned into a life-time commitment for each other. Before they could take a decision to tie the knot, the lovebirds moved to Bahrain for better prospects in 1996.

In 2010, when Jose returned to his roots, the couple made a bold entry in comedian Ambe’s tiatr ‘Dhanvta To Ghoddo’, followed by another three productions. Thereafter, they joined Jr Reagan’s troupe in tiatrs ‘Teddy Bear’, ‘Teacher’ and ‘Ticket’.

Due to health issues, Evon stepped back and Jose made an entry as a substitute in Prince Jacob’s tiatr ‘Amchem Konn Chinta?’, followed by another 10 productions. He was last seen in the same director’s tiatr ‘Aao Jao Goa Tumhara’.

As actors and singers, with vast experience under their sleeve, Jose and Evon decided to emerge as independent tiatr directors. And under ‘Stancio Productions’, the couple first took a plunge by scripting and presenting Carnival folk plays (zomnivhele fell) during the festive season.

For the past 8 years, the couple has been staging their folk plays in the Salcette taluka during Carnival, beginning their presentations from Friday onwards, instead of Saturday or Sunday, which is the usual trend among other folk play directors.

The schedule of this couple’s folk play presentation is of 5 days, wherein 45 shows are covered in three days and another 22 shows in the remaining two days. “More than the tiatrs, we have found fulfillment and success in scripting and staging folk plays and we wish to continue with it in the near future,” informed Evon.

After a tryst with folk plays during the Carnival festival, Jose and Evon also ventured with their own productions on the tiatr stage. And the entry came about by participating in the annual Kala Academy (KA)’s annual tiatr competition in 2017 with tiatr ‘Borem Korit Borem Bhogit’.

Due to his striking features, Jose has always enjoyed villain roles and has mostly been offered by the tiatr directors and in films as well. Evon enjoys tragedy and comedy roles, “but on most occasions, my director comedian Ambe has offered me the villain roles,” she concealed.

More than any other role, Evon is more comfortable in comedy roles and she doles out fine performances, especially when performing with her son, Stancio. In Mini Mario’s production ‘Patang’, she came in as a substitute for Janet and thereafter in all three of Jose-Evon’s productions she has presented herself as a comedienne.

The couple is grateful to the tiatr audience, who has accepted and appreciated their hard work on stage and they are equally thankful to the print media for constantly supporting their ventures.