Many young Goans have scant opinion of the Opinion Poll

It was one of those momentous occasions that defined the future of the state. It was the Opinion Poll that would decide if Goa remained a separate Union territory or merged with Maharashtra. Today we ask the youth what it means to them. How much do they know about it and were they aware it was a referendum. Café provides you the answers 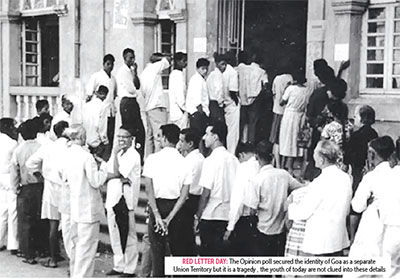 January 16, 1967 is a red letter day when the people of Goa voted to stay a Union Territory. Dr Jack Sequeira known as the Father of the Opinion Poll played a pivotal role in ensuring a referendum was held.

I don’t really know much, I am aware a referendum was held to decide if Goa would remain a Union territory or merge with Maharashtra.  I don’t remember much apart from this. -Isihita Rao  BA Mass Communication studentI have absolutely no idea what you are talking about. Sorry.    -Dylan Correya   B A Mass Communication   studentIt was proposed by Dr Jack Sequeira  and it was an opinion poll that would decide if Goa would merge with Maharashtra or stay a Union territory. As we know most of the people opted to stay separate. -Arya Bhobe   BA Mass Communication studentI have heard about it but not really sure what it is all about. -Shane da Costa MBA in FinanceIt is about taking opinions right. I don’t know much, I think we learned something about it in school. My brain is a bit frazzled studying for the exams scheduled for January 18 -Adam Barodawala  BA Mass CommunicationIf memory serves me right it was about asking the people’s opinion about staying as union territory or merging with Maharashtra. I don’t know anything else about the people involved. -Bilal   khan Student of Journalism  I have heard it but not aware of the details. I studied it for my 12 standard exam in political science. It was a movement of some sort. It was a referendum whether we wanted to be an independent state or merge with Maharashtra. -Aryavrat Malhotra   BA Mass CommunicationI have not heard about it, I am sure I did not study about it in school -Christopher D  souza   BA arts in Mass CommunicationI have no idea; I don’t remember this at all. No idea at all, I have absolutely no idea. I don’t remember studying it.   -Zainab Quadri BA Mass Communication   Of course I am aware of the opinion poll. I live in Merces, we are very proud of Dr Jack Sequeira and we have a road named after him. We have a lot of respect for him and the fact we are a separate state is all due to his efforts.   -Adrian Fernandes   BA Mass communication  I am sorry; I have absolutely no idea what it is all about. -Azhan Sheikh  B A  Mass Communication  I studied all about it in school. It was a referendum that helped Goa remain a union territory and not become part of Maharashtra. How can anyone forget it?   -Aaron  d souza Student of journalism  Yes, I am aware of it. I should know about it because my grandfather was a freedom fighter. It was a poll that would decide if we would be a separate union territory or merge with Maharashtra. I don’t remember the names of the people involved but I am familiar with it. I learned it in school as well as at home.  -Nishad  Hegdedesai Law studentI don’t know what you are referring it. Is it an opinion poll taken which is then analyzed used analytics?  I am sure I studied about it in history but I can’t remember anything. I am a student of science. -Soham Naik Student of Bio- technologyI am not really aware; I did not study it in school. I am hearing about it for the very first time. -Mrinalini Pai Student Mass Comm  Yes, I have some idea. Dr Jack Sequeira was involved in it and fought for the opinion poll to be conducted. It was the biggest poll in Goa with fantastic turnout. It was a great result for Goa. How can anyone forget this? -Clesito Fernandes just completed MBA