Mohan Lal, one of the biggest stalwarts of South Indian cinema is set to direct his first film which has strong Goa connection. A 3 D film with a stellar starcast, is centered around a mythical figure called Barroz who has been guarding Vasco da Gama’s treasure for over four hundred years. The film will be shot in Goa, Portugal and other locations. The legendary actor/director and his crew will be in Goa next week to begin shooting 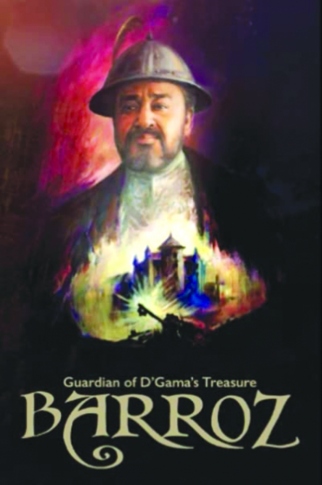 Goa will feature prominently in a film that will revolve around the mythical figure called Barroz who has been guarding Vasco da Gama’s treasure for four hundred years. He will hand over the treasure only to the true descendants of Gama. This movie called Barroz: Guardian of D’Gama’s Treasure in Malayalam will be shot in Goa, Kochi, Dehradun and Portugal.  This movie highlights the connection between Goa and Portugal.  And yes it is in 3D.

The movie is helmed by Mohan Lal a superstar of not just Mollywod (Malyalam.movies) in the state; this is his first foray into Directing.  The ambition of the film can be gauged by the fact that international actors like Paz Vega,   Rafael Amargo  and   Shayla McCaffrey are a part pf the cast. Spanish actress Paz Vega had starred in several Hollywood films including Spanglish, Kill the Messenger to name just a few movies. Rafael Amargo, meanwhile, is an acclaimed Spanish theatre actor and choreographer. Mohanlal will essay the role of Barroz. The starcast also includes Prithviraj Sukumaran one of the biggest names in Malyalam and South Indian cinema. The story centers on a Portuguese-Afro-Indian myth. Along the Malabar coast of India, there is told a 17th century fable, about a hidden treasure, the treasure of the D'Gama family. The story dates back to the maritime period when Portuguese seafarers sailed to India in their magnificent galleons and built forts, cathedrals and colonies in India. Goa. Many Portuguese nobles had come with their families to settle down here. They brought with them their trusted black (Malagasy, Masikoro) slave servants from the African coast of Madagascar. By the 1600s, the splendor of Goa was at its height. Travelers marveled at 'Goa Dourada' i.e.; Golden Goa. There was even a Portuguese proverb - 'Quem viu Goa excusa de ver Lisboa' - meaning, “He who has seen Goa need not see Lisbon”.No wonder Goa attracted the envy of the Dutch - a colonial competitor to Portugal, and the wrath of the Marathas - a local kingdom abutting Goa. One fateful day, their land forces launched a combined assault on the fortress at Goa. The movie showcases the aftermath and its repercussions. The lost treasure has titillated the interest of people down the ages. Through centuries, many people have attempted to find it, in vain. For, nobody other than a descendant of Marques D'Gama can get to it. In fact, it is said that even if it were the descendants of Black Pa Barroz themselves, they shall not succeed in finding the treasure! Shooting in Goa commences on August 9th.  Mohanlal believes Barroz is a story of was shared heritage inherited from our ancestors. The screenplay was written by Jijo Punnoose based on his novel Barroz: Guardian of D' Gama's Treasure.
Related news