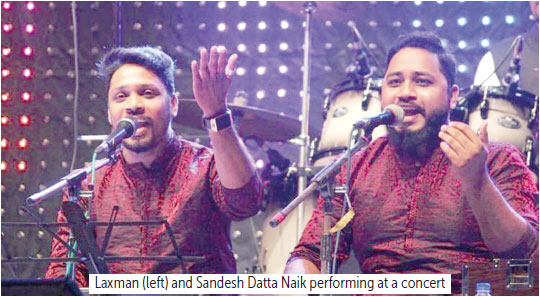 The Naik brothers from Canacona – Laxman and Sandesh have triggered a storm literally by lending their voice to two songs in the upcoming south Indian movie KGF: Chapter 2. The two songs are titled Toofan and Sultan – both used for the Hindi dubbed version of the movie.

Known for performing in classical and semi-classical singing concerts in different parts of the state and the country, the big break for the brothers has given them instant recognition, which has come after a long struggle.

“Some 10 years ago the music director of KGF, Ravi sir (Ravi Basrur) had met us during the release of a Konkani music album Moga Mhajya in Goa. I was one of the singers for the album, which was composed by E R Vinay, who is also from South India. Vinay sir liked my voice a lot and told Ravi sir about me. He then called me one day and took my audition over the phone. We mostly sing Sufi songs. Ravi sir liked my voice and later called us to Bangalore for a project. Since then he had kept me in his mind,” said Laxman, elder of the Naik siblings.

When KGF songs were finalised for recording, the duo was called to Basrur’s music studio in Kundapur, in Karnataka.

“We went there and he dubbed four songs in Telugu and Kannada in our voice. Later, Covid-lockdown happened. After a long wait of two years, they recorded two songs for the Hindi dubbed version titled Toofan and Sultan and finalised for the movie,” he said.

Speaking about the preparations for singing in Telugu, Laxman said that the Assistant Music Director helped them with the words, meanings and pronunciation.

“It was not very difficult for us because we listen to all types of music, including South Indian songs. But their song texture is very different. Their songs have a lot of force in it. When we were first told that we were to sing for a South Indian, although we didn’t know the movie name, we were very excited because it was a huge platform for us.

Later they were informed that the movie was KGF chapter 2.

"We were speechless because the first part was a resounding success and everyone was waiting for the sequel. We left everything and rushed to Kundapur,” Laxman said.

Although the duo was to sing with two other Bollywood singers Brijesh Shandilya and Saaj Bhatt, the Naik brothers are not upset that they didn’t get a solo song.

“We are not disappointed because this is a huge platform for us. This will surely propel us to do bigger projects in future. In fact, Ravi sir has promised to involve us in his future projects too. That is a very big thing for us,” he said.

This success is sweeter for the Naik brothers because they have come up after a lot of struggles in their personal life.

“We belong to a very poor family from a remote village in Canacona taluka in South Goa. In our childhood days, we barely managed one square meal a day. But our father worked very hard and brought us up to this level. We are very happy with what we have got. But we will certainly keep working harder to grow in life,” he said.

In his message to fellow Goan artists he urged them not to get disheartened easily if they were not getting any good break. Their time will come.

“We never went to anybody asking for opportunities. We kept working hard and our work came to the notice of people who matter in the entertainment industry. So, those who are feeling disappointed that they are not getting the right opportunity to showcase their talent, I would request them to remain patient and keep working hard. Eventually talent will get recognised and you will reach your destination,” he said.

KGF: Chapter 2 is a period action film, written and directed by Prashanth Neel. The film, which is produced by Vijay Kiragandur, will release in theatres on April 14, 2022. The film is a sequel to KGF: Chapter 1, which took the box office by storm in 2018.