Not a pretty picture

Jobs have been lost in large numbers and Goans faced the brunt in places like the Middle East and on the cruise liners. Many spoke about what they were doing now in Goa as they waited desperately for that call 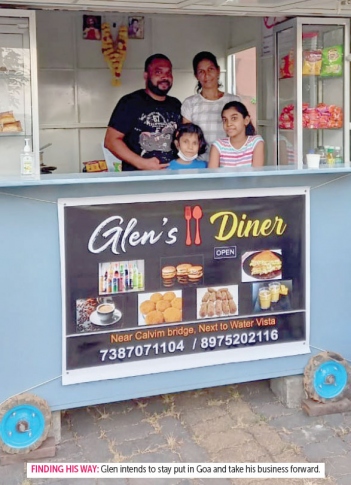 The virus has caused devastation all around. Death, jobs loss and yes destruction to the economic life all around the world has been one of the consequences. Goans those inveterate travelers who can be found all over the world have also been affected. Especially those who live in the Khaleej and personnel on cruise ships. The virus has devastated these places and sectors. The virus paid no heed to rank. From housekeeping staff to managers, they all lost jobs and had to return to Goa.

Glen Fernandes was a veteran of the gulf having spent around 19 years in Dubai. Employed at a five star property he lost his job when the first wave hit that city. He was however fortunate to get employed by another star property. However the extreme vagaries being experienced by that economy meant he was retrenched. With a wife and two kids in Goa, he returned to a uncertain future. He was however motivated enough to start a small business. Glen started selling Goan fare near the Calvim Bridge. He said “I am focused on Goan specialties and business has been ok. I am getting settled. I intend to get into catering and am focused on getting better. I am happy. I don’t intend to go back.”

Several Goans are employed on cruise liners. Mathson Miranda was a baker on a cruise liner. Now in Goa for more than a year, he has kept himself busy working with his dad who has a bakery and his brother who bakes cookies. Mathson said he intended to stay back and help them with the business and help it grow. He however did not discount the possibility of taking up another assignment on the ship sometime in the future when the virus was a distant memory.

Baldwin Pereira was busy playing with his kids when he was called by this journalist. A long time traveler in the Middle East he has worked on various projects across the khaleej. A civil engineer he has been earning income from a number of flats the family owns in Arpora. He is presently awaiting a call from the Portuguese consulate for his passport which expired a year ago. Baldwin intends to fly to England once the procedures are completed and search for employment. He hopes everything falls into place in a couple of months.

Akshay Bhagkar is another sea hand waiting for a call. A housekeeping professional he worked through two contracts and is now on land for more than a year. He is presently surviving by setting up a shawarma stand which he operates with his brother and cook. He says business is decent with him able to touch around Rs 5000 approximately in a day. However with Ganapati and Shravan , business had dipped. He was however very clear that he intended to go back to work on the ship and was waiting desperately for that call. Elroy Barreto a waiter in the baron a cruise ship, it was a very bad experience. He was stuck along with his fellow staff members on a cruise ship in Spain for six months. He returned to Goa last year in June and has been surviving on his savings. He said” I am desperately waiting for that phone call. I don’t have a job here. It’s tough when you see your savings reduce every month.”

Leslie Mendes was in a similar condition. He said “I have been on land for more than a year. I am sitting at home living off my savings, in a coupe, of months, I don’t really know what the situation will be if this continues. I really hope that call comes otherwise guys like us will be in really bad shape.”

Others were too distressed to speak with one of them saying his family was looking to him for financial support and savings were reducing very fast. One can only hope the virus is controlled around the world and the travel industry picks up and is able to start hiring in numbers. Otherwise the alternative will be chaos with large number of people desperate to do anything to feed their families.