Questions and more questions at the festival 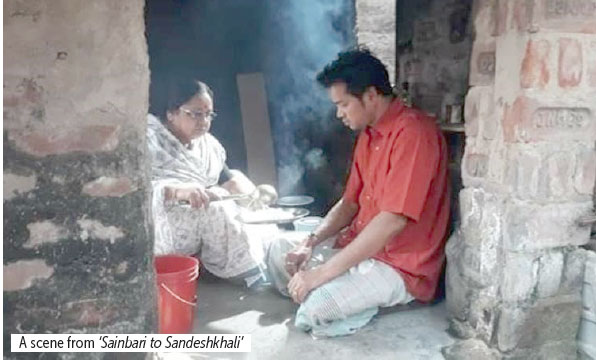 There are questions that pop up regularly as one lives one’s life. Some existential and others more political in nature. Like the incontestable question raised by Sanghamitra Chaudhury, Director of the film Sainbari to Sandeshkhali “If Jallianwala Bagh, Battle of Panipat and Battle of Buxar appear in our history books, why not Battle of Sainbari where 15,000 people were killed in just one night?”

The film follows the trail of politically inclined mass murders that took place in Sainbari, Sandeshkhali and other places of West Bengal during the period 1970 – 2019. Chaudhury recalls how these killings came to be. “These affected people were refugees from East Bengal, now Bangladesh. They came to take shelter in West Bengal. However, they were sent to remote islands of Sundarbans and there, all necessities like medicines, clothes and food supplies were taken away from them. So, they started farming and had to make do with subsistence living. One night, there were boats carrying unknown people to the land; these people who came in boats killed the refugees and set fire to their houses. This is the tale we have portrayed in our film.”

Narrating the particular incident of Sainbari, from where she says it started, the Director said: “I went 50 years back and started the film from Sainbari onwards because that was the most dreaded political murder. There, an entire family was killed and the mother of the killed sons was forced to eat rice stained with her son’s blood. There was only one brother who survived because he was not in the house at that time. There are people in Bardhaman who still remember this incident. These are stories which are not narrated in our history books.”

Chaudhury revealed that the film shows how the bereaved families are still reeling under the traumatizing effect of the tragedies inflicted upon them. “In the riots of Sandeshkhali, three young people were killed after the Panchayat elections. One corpse among them is still missing, so his wife is continuing to wear sindoor. She says, ‘until and unless I see my husband’s body, I will not believe he is no more’.”

She admitted that it takes courage to make a film of this kind. “Initially, when I started making this film, I made a small trailer and put it up on social media. Soon, I started getting threat calls from unknown people. But I challenged them back saying, ``if you can come, I will show you the documentation.”

It was very hard to get the documentation for the film, however, the Director said. “During the period in which the incidents took place, there was no social media, no cameras; and media were not allowed inside. But there are people who were witnesses and who narrated the whole incident. So, this is more a film on history than a political film. I did thorough research and against every scene, there is documentation - either people who have witnessed the happenings or newspaper cuttings I have collected. Some TV footage is also there, which I got at a later stage.”

Chaudhury confessed that getting documentation and making the film was very painful as well. “I went to all affected areas and talked to the bereaved people. As they narrated their experiences, I could see tears rolling down their cheeks. They were still not freed of the horrific remnants of the wounds those incidents caused.”

Then there are more existential questions one is forced to ask after experiencing loss. Unable to cope with the ineluctable vicissitudes of life and having failed at putting an end to her life, Anna has to now confront the seemingly more excruciating proposition of facing and enduring life, rather than running away from it. The unenviable position Anna finds herself in takes her along an expedition which turns out to be liberating and revelatory in new and profound ways. Her journey is showcased in Humanization, a film by debut filmmaker Giulio Musi.

He said “The film dives into a philosophical discussion about what being a human entails and how a human being creates one’s own reality.” After losing her child in an accident, Anna gets estranged from mundane life and stops feeling physical pain. That is when she decides to end her life, throwing herself out of a window. Miraculously, Anna survives and wakes up in a nursing home where she befriends a nurse and a young boy. Slowly, she starts to create meaning in her existence in the hope to be able to carry on living. But how does this created meaning relate to the actual reality?

Musi throws light on the illumination which the character attains in the course of her striving for the discovery of the meaning of her life. “At a point, Anna comes to an understanding that she has attained perfection after losing everything, because she has nothing more to lose. This is a very fatalistic idea though. My film asks a question on the attainment of perfection by losing one’s relationships: is it an escape from reality or is it the true perfection?”

Elaborating on this phenomenon, Musi said that there are two schools of thought about human beings and becoming. “According to one view, we are all born perfect, but as we progress or rather regress in life, we lose our perfection. Another view says that we are born imperfect, we need to then strive to be and become who we can be.”

He took special care in choosing acoustic and visual elements in order to let the story be an authentic portrayal of Anna’s grim realities and existential sufferings. He wanted to ensure that it is devoid of colour, says Musi. “The format of the film is very important for me. We kept it black and white and shot it in 4:3 frame to give the film a more timeless and intense look and to avoid exaggeration. We have also not used music; instead, we have used more natural sound and silence to underscore the dramatic sense and give prominence to the philosophical questions that the film raises.”

Actor Louise Ryme, who plays the role of the nurse who tends to Anna, expressed her happiness at the World Premiere and the reception the film had at IFFI. “Our film was received very well by the audience. Some actors also came to me and praised my performance, which was overwhelming.”

An interesting day certainly at the festival without a doubt.