REGGAE WITH AN INDIAN TOUCH

Dentist turned musician Varun Carvalho is working with James Malcolm, the cousin of Bob Marley on an album that will bring together the sounds of India and reggae. James spoke about his stay in Goa and his plans for the album 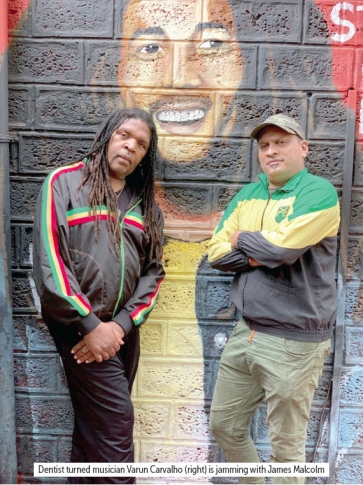 It is a popular music of Jamaican origin that combines native styles with elements of rock and soul music and is performed at moderate tempos with the accent on the offbeat. That is what you get when you get the punch in the word reggae. It is a genre of music that emerged from the so called third world and gave the world its first superstar. Bob Marley a man who symbolized the hopes and dreams of a generation of men of African heritage. That genre of music which grew under his tutelage has grown increasingly popular around the world.

Now a man from that family that gave the world Bob is now in Goa. James Malcolm, the cousin of Bob Marley and an acclaimed composer, pianist and social activist through his work with young children over the years is working with Goa’s very own Varun Carvalho on a new album which they hope to release in a couple of months.

Asked if this was his first visit to Goa, he said he had visited Goa ten years ago when he was on tour. He said “We had performed in Goa, Sri Lanka and a couple of other places in 2012 and I liked the vibe of the place. I met Varun who I call the Doctor and it was nice. When I was done with the tour, I returned to Goa. I do a lot of work with children, specifically orphans and when I meet them I usually bring keyboards for them”. He said his relationship with Varun grew over the years with him visiting James in Miami on the occasion of his birthday. Now he said he was here to work on the album and Reggae Haven, the place Varun established to encourage musicians to come and play reggae and other genres of music. James said the establishment was now home for him in Goa.

Asked to speak about the state of reggae worldwide and in the West Indies, he said he was very proud of the work done by his cousin Bob Marley. He said it all started in the capital of reggae, Jamaica and from where it spread.

James said “I am so proud of the work he put in and its popularity now. At eighteen I lived with him and it is a pleasure to see it grow and be popular. In Goa, I am representing my family and I am so proud we are working on an album here in Goa which has its roots in reggae. Speaking of Goa, I have been here and it is obvious it is growing bigger.” He said he was watching various acts in Reggae Haven and it was obvious there was interest in the genre. India, he said, loves reggae. James said

Asked about the album he was working with Varun he said it would bring reggae and Indian culture together. They were blending the traditional sounds with reggae. There would be around twelve songs on the album though they were taking it one song at a time.

Asked about the subjects they intended to talk about on the album he said “It just comes, nothing is written and we will develop ideas as we speak. There are some songs that he has and some we don’t know about. This is how it was with Bob Marley too; it would happen when it had to happen.”

Asked if any big star would participate in the album he said it was all in the preliminary stage but there was a strong possibility members of the Marley family could be part of the album. He said there could be other surprises too and an announcement would be made at the appropriate time.

The album he said would be released in India, USA, London and other markets around the world. They were looking for a July or even August launch and were confident once they entered the studio, the energy would flow and an excellent album would come out.

The possibility of an entirely new genre emerging sounds interesting and that could be music to jaded ears.