Reclaiming village ponds, with a little help from migrants

An initiative to clean up village ponds in Goa of all the garbage thrown over several decades, with the help of migrant workers, has produced amazing results, a sign that out of the box thinking and action helps our surroundings 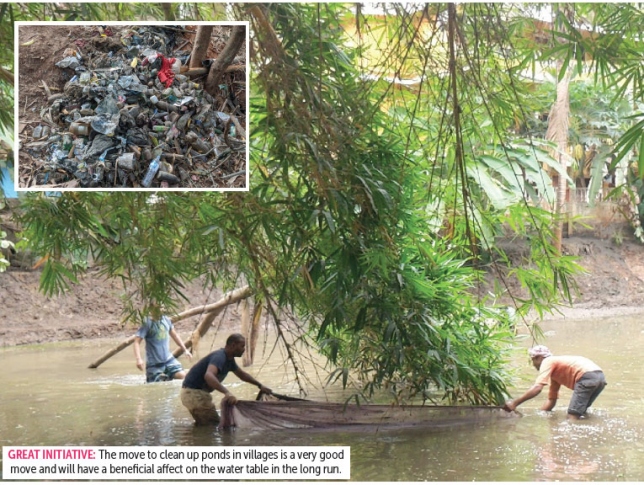 There are agitations taking place to save the ecosystem in Goa. A quiet initiative to save water bodies around the state has caught the attention of many eco warriors of Goa. The effort commenced in Saligao thanks to an artist who felt concerned about the disappearing water bodies around her house.

Harshada Kerkar a Goan artist said she would see a lot of buffaloes around her house because of the pond. They would drink from it. She said “I would sometimes find injured buffaloes and we tried to find the owners. Some of these animals come from Anjuna in search of water because there were water bodies around in those places. Most of the ponds are on communinade land but most of them have now gone into private property. So access to water is not possible for these animals. That was one of the reasons why I started this initiative. Years ago we used to see so many mini ponds on both sides of the roads which I sadly not the case anymore.”

She went onto say that Water buffaloes were a source of much inspiration to artists she said. Ruskin Bond had talked about swimming with water buffaloes in his youth. Another motivation was the fact that so many people were without jobs and unable to earn any money. Lamani women could not find plastic on the road which they would sell . This initiative was timely for them

She said a friend; Hyacinth Pinto would talk to her about a dream of cleaning up the Santinez creek. Harshada said it was an impossible dream and it would be important to do something that could become reality.

When the idea of cleaning up ponds was presented the idea excited everyone, specially because ponds belong to the community and there is an emotional attachment with village ponds. Harshada said “Because of the lockdown everyone could come together and move ahead. It was very satisfying. In the first pond, we would find whiskey bottles which were throw over a period of thirty years. And yes we did not come across any fish, though we came out with with many beer bottles. The ponds were neglected by the people in the area”.

She added, “Due to the large number of glass bottles everyone had to be very careful. All this was sent away in the garbage van. Later they cleaned four ponds as well as little wells that were neglected for several years that were found in various fields.

The initiative is still on and they intend to continue it in other parts of the state. They are going about it in a very logical matter. They were cleaning up the Marshel pond but scientifically it was wrong and it was decided to recommence the activity before the monsoon. So far three wells and two ponds have been cleaned and eight more water bodies will taken up next.

With regards to payments, during the very first cleaning initiative, the organisers went around to the houses in the area and received donations. Later the Rotary club got involved and helped out with paying the migrant workers involved in the effort. In the beginning they were paid Rs 500 per day and later as the lockdown relaxed salaries increased to first Rs 600 to Rs 700 per day.

The group used crowd funding to good effect which meant wherever ponds were cleaned the people in the neighborhood would ensure it stayed that way. Hyacinth Pinto an architect and multi disciplinary professional helped out in this initiative. She said “We are part of a group that decided to work on this initiative. It is so important to revive old water sources because it is important to replenish the water table. My contribution is to ensure it is done in an eco-friendly manner. I showed them the way the traditional methods how no one used concrete earlier”.

Another person involved in the exercise was artist Sharada Kerkar who manages the Museum of Goa. She said Harshada had explained the idea and the importance of getting migrants involved got her on board. Sharada said “I had worked with migrants after the lockdown was announced and I have worked with ngos’s for several years. I did all the coordination that was my job”.

This is certainly a welcome initiative and one can hope it spreads all over Goa and more groups take up this initiative. The future of Goa with a good water table is very important.