SANGODD - THE FESTIVAL ON THE RIVER

The feast of Saints Peter and Paul has its very own celebration in Goa known as Sangodd. St Peter is the patron saint of fishermen and the fishing community and his feast marks the blessing of the sea as well as the boats and canoes for the coming season by taking the celebrations from the banks to the river 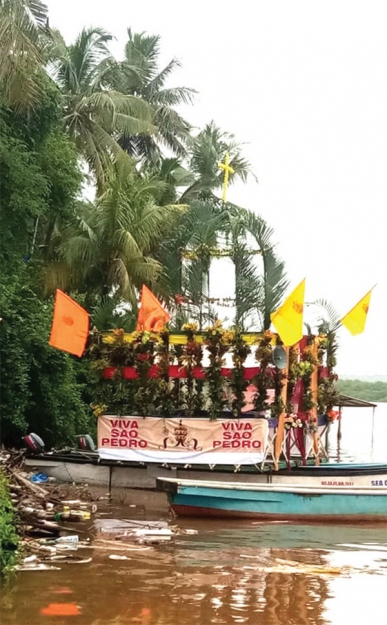 The Feast of Saints Peter and Paul, observed on June 29, is a liturgical feast in honour of the martyrdom in Rome of the apostles St Peter and St Paul. The feast is traditionally celebrated by fishermen all over Goa as the festival of ‘Sangodd’ and marks the start of the ‘rampon’ fishing activity. With youngsters now taking the lead, elaborate stages comprising a decorated chapel is erected on fishing boats that have been tied together.
Usually, every patron feast in Goa is celebrated with a tiatr in the evening at the church courtyard but for this particular feast, the stage is set on water. For ‘Sangodd’, canoes are tied together and a wooden stage is set up on the canoes for entertaining the audience. ‘Sangodd’ is the only Catholic festival in Goa that witnesses this tradition. In Goa, different villages with a thriving fishing community have their celebrations for this feast, some even dating back centuries. In Candolim, ‘Sangodd’ is organised annually by the St Cruz Chapel Committee, which comprises ten members. According to a few villagers from Candolim, Orda was a place that housed many families of fishermen. The tradition of celebrating ‘Sangodd’ dates back to over 150 years and was followed by their forefathers. ‘Sangodd’ starts at around 3:30pm at the Orda jetty and used to move to another six stops in the water so that the audience standing at different locations could get a glimpse of the festivity. The tradition of celebrating the festival has been carried on by generations consistently and their faith in the Saint has increased over the years. This year, the performances will be on the Orda jetty only and then the boat will proceed for a trip around the river. Anthony Fernandes, a member of the organising committee of St Cruz Chapel, informs, “The ‘Sangodd’ will begin by 3:30pm at the St Cruz Chapel in Orda, Candolim, where the villagers will say prayers and sing hymns in the chapel. From there, we will proceed to the Orda jetty, where the boats are prepared especially for ‘Sangodd’. The live performance will include Konkani songs and comedy skits. This feast shows the unity of the villagers and earlier when the surroundings were open, you could see the ‘Sangodd’ moving to different stops; now the view is disturbed with compound walls.” In Ribandar, the feast of St Peter is being celebrated on June 29 for over 105 years. The celebrations begin when the Parish Priest of Ajuda Church taking the statue of St Peter in a procession from Ajuda Church, Ribandar. The priest gets onto the two boats that are tied together in the river along with the brass band. The ‘Sangodd’ takes a ride in the river, right from the jetty opposite the church to the Goa Institute Management, where it takes a turn and comes back to St Peter’s Chapel, which is located in between Solar dos Colaco and Camelot. Holy water is sprinkled on the river to bless it and the fishermen dip their fishing nets into the water and pray for safety and a great catch for the entire year. The hymns of Saints Peter and Paul are sung on the ‘Sangodd’. Michael Fernandes, President of St Peter Chapel, Ribandar, says, “Once back to the church, during the Eucharistic celebrations, some fishermen offer their canoes and motors, sacrificing the fishing for two days as St Peter is patron of the fishing community and always protects them. The evening activities will begin at 4pm when all the villagers get together for a procession in the traditional canoes in the river known as ‘Traditional Sangodd’. The litany is said in the evening at 8pm at St Peter’s Chapel, Ribandar, followed by dinner.” In Ambelim, the feast of St Peter will be celebrated at Our Lady of Lourdes Church with a Eucharistic celebration at 6:30am on June 29 and depending upon the tide, the ‘Sangodd’ will ride into the River Sal. Benjamin Silva, a member of the Hard Rock Club that has been organising Sangodd, says, “Earlier, we used to have nine boats together to create the stage for ‘Sangodd’, this year, we have two big fibre boats tied together for the festivities. We need the high tide to flow in by 1:30pm-2pm to take the boat into the river. The priest blesses the river and fishing nets. This year, we have even planned to have custom made jerseys in blue with a Goan scenery printed on it to go with the festival.” ‘Sangodd’ isn’t just important for the fishing community but for every Goan who relies on the fresh catch of the day to please their fish loving appetite. As the seas are blessed today, we hope the catch is also blessed abundantly for the entire season.
Related news