An inspirational short film on a specially abled musician who goes around training musicians from house to house in Salcete has caught the fancy of the people of Goa. Now a people funded short film on him .ade it to the Short Film corner at Cannes. Café spoke to the musician Agostinho Fernandes and the people behind the film 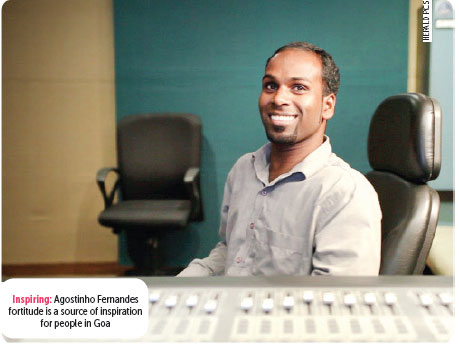 One can seek inspiration in anything. It could be a quote, a piece of music, in sports or in the lives of others. An especially abled Goan entrepreneur has caught the attention of the people of this state. An award winning inspirational Konkani short film on Agostinho Fernandes has crossed 6000 views in the very first week after it was hosted on Youtube.

Amey Hegde, a motivational speaker and Executive Producer who spent time with Agostinho, met him at an event organised by a trainers association which was giving out awards to people who had shown a spark.  They talked and Amey said he was impressed by the spirit and drive of the young man. He decided to make a short film so that others could get inspired by him. Amey said “I approached many well-to-do people in Goa over a period of one and a half years asking for help to finance this non profit film with a social message but sadly did not receive any support. I almost gave up on my dream of making this film before finally putting up a message in July 2014 to my Whatsapp contacts asking for funds. Unbelievably, in two hours I collected Rs. 86,000/-. The film has over 25 sponsors, many of whom are people doing regular jobs and earning average incomes”.

He then approached film maker Ramprasad Adpaikar, whose film, ‘In Search of Mother’, was screened at the International Film Festival of India in 2014 to make a documentary on Agostinho. He suggested it would be interesting to try something different and go in for a docu-drama since more people prefer watching films having moving stories rather than documentaries.
Agostinho said “It feels nice to have a film on me. I teach music going from door to door in Salcette and I like what I am doing. It is good to see talent blossom. I was a bit surprised when they first suggested the idea to me. Since I acted, it required training. It was quite an experience to act in the film”.
Amey said the film was about how many students despite having completed their education were unable to get jobs and some experienced underemployment. He said “This film highlights this issue and suggests a way to resolve it though entrepreneurship. The story of the film revolves around how a demotivated youth who is unable to get a job despite his best efforts meets Agostinho and gets inspired to follow his dreams. ”

As a corporate trainer, he and his wife Dr. Jyoti Hegde have screened this film over hundred times in the past six years for tens of thousands of people. It has been screened for students and teachers of various schools and colleges in Goa. He said “ We have also screened it while conducting training sessions for thousands of employees of various corporate houses. EDC too has screened it multiple times to motivate aspiring entrepreneurs. We also entered some film festivals. The film won the best short film award and best director award at the short film contest ‘Frames 2017’ organised at Chowgule College in November 2017. The main reason we had not put it on youtube till now was that many film festivals require that the film must not have been broadcast on the Internet. However, we have made it available on Youtube now to motivate people in these difficult times of the COVID-19 pandemic”.

One can only hope , more people turn out like Agostinho, who are determined to make the most of their situation.