She Treasured These Things in Her Heart 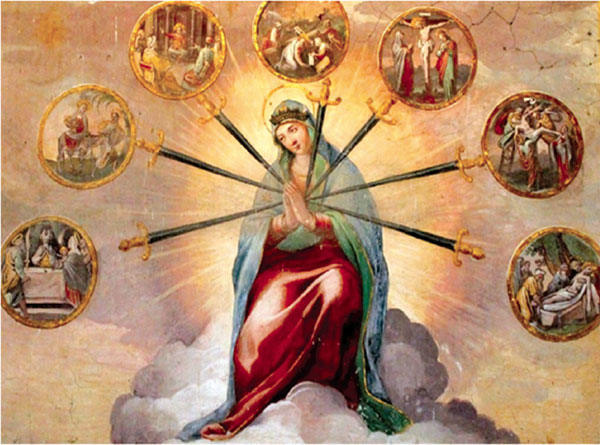 The Month of September is like a coin with two sides. A month where we are reminded to celebrate the Joys and Pains of our life! For without joy/pain there’s no beauty. Just like the rose plant without thorns loses its charm, fascination or attraction whatever you call it. It’s a month where we celebrate the Teachers day, the Nativity of the Blessed Virgin Mary, The Exaltation of the Cross and the Mater Dolorosa – the Lady of Sorrows. The Word sorrows bring to mind couple of instances where we indeed enjoyed the nick names kept for certain persons. Yes, each personality had a different name. Say: cause of our Joy, the most Prudent, Mirror of justice, Seat of Wisdom, Help of Christians and the famous our lady of sorrows! ‘Hey, here comes the lady of sorrows’!!! This is often mentioned even in the retreats. Having given a thought to these names we do have people with these traits and now we can add ‘the solace of migrants’!

The formal feast of the Our Lady of Sorrows was originated by a provincial synod of Cologne in 1423. It was designated for the Friday after the third Sunday after Easter and had the title: Commemoratio angustiae et doloris B. Mariae V. Its object was the sorrow of Mary during the Crucifixion and Death of Christ. According to Fr. William Saunders, “... in 1482, the feast was officially placed in the Roman Missal under the title of Our Lady of Compassion, highlighting the great love our Blessed Mother displayed in suffering with her Son. The word compassion derives from the Latin roots cum and patior which means “to suffer with”.

In 1668, a separate feast of the Seven Sorrows of Mary, celebrated on the third Sunday in September, was granted to the Servites. Pope Pius VII introduced it into the General Roman Calendar in 1814. In 1913, Pope Pius X, in view of his reform giving precedence to Sundays over ordinary feasts, moved this feast to September 15, the day after the Feast of the Cross. It is still observed on that date.

The Seven Sorrows of Mary are a popular Roman Catholic devotion. In common religious Catholic imagery, the Virgin Mary is portrayed, sorrowful and in tears, with one or seven long knives or daggers piercing her heart, often bleeding. Devotional prayers that consist of meditation began to elaborate on her Seven Sorrows based on the prophecy of Simeon.

At Fatima, on October 13, 1917, during the miracle of the sun, the children saw Our Heavenly Mother appear as Our Lady of Sorrows. In the Gospels, we read of Our Lady of Sorrows at the foot of the cross watching her Son die. Venerable Archbishop Fulton J. Sheen, writes in his book “The World’s First Love” about Our Lady. She is the Co-Redemptrix. She cooperated perfectly with our Lord for our redemption. Her great grief was watching her Beloved Son die on the cross and not being able to die instead of Him.

Her love for mankind is great because she loves us as God loves us. Her love for us is shown beautifully in her Seven Sorrows. Tradition says that Mary’s heart was pierced seven times with seven swords of sorrow. This constitutes her seven Dolours. Yet, Archbishop Sheen says that these seven swords were indeed seven thrusts of one double-edged sword - the sword being Jesus Christ Himself - one edge going into His own Sacred Heart first and the other edge going into her Immaculate Heart. Archbishop Sheen continues saying, an unsuffering Madonna to a suffering Christ would be a loveless Madonna. Who is there who loves, who does not want to share the sorrows of the beloved? Mary could not wipe away the tears of her children unless she herself had been their fountain. She has rightly earned the title Mother of the Afflicted.

St. Paul tells us that we cannot be partakers of His Glory unless we partake in His crucifixion. Being the Mother of God has made Mary no less exempt from this law of sacrifice. The seven swords that pierced the Immaculate Heart of Mary our Mother are:

1) Simeon’s Prophecy 2) The flight into Egypt 3) The three days loss in the temple 4) Meeting Jesus with His cross 5) The crucifixion 6) Taking Jesus down from the cross 7) The burial of Jesus.

The first sorrow that pierced her heart turned her heart into an ocean of love. Perfect love casts out fear and as the Word in Luke 2: 19 says: “she treasured these things in her heart and pondered...”. Mary’s heart was one with her Divine Son’s Heart. Her sorrow was not for what she suffered, but for what Christ had to suffer. Love never thinks of itself. Our mothers too kept/keep many things in their heart and shed tears. I saw my own mother and as a child I could not understand. But when I learnt the scriptures I understood and could affiliate it with Mother Mary. Surrendering everything at the foot of the Cross, at the feet of Jesus does indeed give solutions and comfort.

Due to the deadly disease and its bad effects people have gone through the horrifying experiences. And to make things worse, the soaring prices of basic needs, food essentials and petrol/diesel prices with joblessness. All the results of these hardships are stored and pondered... The pandemic pondering has brought in reformation and transformation in the lives of people. May we find our comfort in Our Lady of Sorrows as we have recourse to her!.