The manner in which the police have dealt with Goans agitating against the decision to set up the IIT in Shel- Melauli , the filing of FIR’s against those fighting against double tracking and of course those protesting against the projects are well documented. The state has hardened its stance and does not seem to be in any mood to listen to anyone. To protest is at the very core of democracy. Now the state seems very interested in taking that away from the people. What kind of a state are we turning into? Café listened to the voices of peole 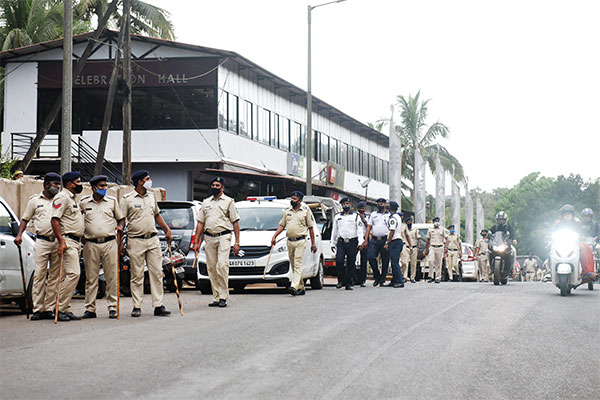 Police Inspector Sagar Ekoskar allegedly stamped on the chest of a woman protesting the IIT complex in Shel Melauli. Young people picked up by the police at Panjim on Liberation day, peaceful protesters organizing a candle vigil in November named in FIR’s. The state seemed to prefer to show a tough face to its people.

The duty of the government is to protect the citizens and keep them safe, to look after the welfare of the citizens, to ensure employment, look after the environment and to run the economy. But today the government seems to do the exact opposite. Using the police force against the citizens who are protesting is completely wrong. Police are there to protect us. But the government is putting fear in the minds of innocent children and the youth. In this way the relationship between the police and the citizens will be terrible. -Stevan Vaz ServiceThe state dispensation in Goa is in a shameful slavery. Our legislators have failed us, our home departments are criminally manipulated and powers are abused indiscriminately. Today’s order at session and district courts quashing and setting aside SDMs illegal order (filing charges for gathering peacefully in Panjim on Liberation Day) against us still gives us hope in the judiciary that our constitutional rights cannot be trampled forever -Dr Father Bolmax Pereira  Parish priest of ChicalimIt's a gross misuse of state machinery to stifle the voice of dissent by framing false charges against civil society who have consciously taken up the cause to protect our environment at great personal risks. -Orville Dourado Rodrigues Convener - VACAD and Founder - Goencho EkvottFrankly speaking I was under the impression the police were just following orders but the recent incident at Shel- Melauli proved me wrong. Orders cannot be followed blindly but responsibly. The police have become heartless. We the youth of Goa condemn such attitude of the police and they should understand, the chair of the politician will change but the police are here to stay. We all have our mothers and sisters and they can’t be ruthless and brutal with the common folk. The police should tell their seniors not to pass on dictatorial orders... -Mervyn Pereira, ServiceI am very sad with the way the police are behaving with the people and youth of Goa who are fighting for saving the environment. But this will not stop me. I will continue to fight and speak up. Forests are important. For my school project on Sustainable Development Goals my topic is life on land and I am presenting the Mollem issue. -Varun D'silva primary school student.The case against Father and the Captain has been quashed. That clearly shows the government tried to stifle the voice of the youth. We had only tried to celebrate our liberation day without posing any danger to the President -Melroy Simoes ServicePeople in Goa protest because we have no other option. The government refuses to listen to our concerns. Policy decisions should be made to benefit people in Goa and when it doesn't benefit we should have enough stakeholder consultations to understand the reasons -Gabriella D'Cruz ServiceBy illegally detaining 2 peaceful activists, ( him and Father Bolmax Periera) the cops under orders from the govt had shot themselves in the foot. The law enforcement agencies should not forget that the wheels of justice will someday turn 360 degrees and come to haunt them. -Capt Viriato FernandesNo human being deserves such inhumane treatment as that which was given to the women of Shel Melaulim. It's a matter of shame that the government needs to resort to such extreme behavior to justify their lies.  -Ana Smriti Paes StudentWhat happened in Melaulim and other places in Goa has been unlawful and horrid. The government has been moribund when it comes to addressing the issues of the public and this clearly shows with the remarks our politicians have made. -Sherry Fernandes   Youth activistFirst they deny us the right to celebrate our liberation day peacefully. Then they arrest us for no reason or fault of ours. As if this wasn't enough that they had to arrest our two brave crusaders, finally glad to know that we won a small battle with the dropping of charges  of Fr Bolmax and Captain Vitiato. The war is yet to be won and we won't back down.  -Kingley D'souza Service
Related news