The number of cases in Delhi has shot through the roof. With a large number of domestic tourists are coming into the state from all over the country, with a sizeable number fton Delhi shouldn't the Goa government re start stringent checks and even have new sops at least for arrivals from Delhi? 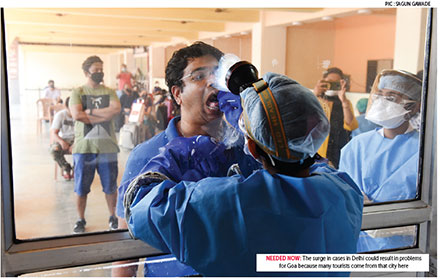 Almost one in ten homes in some villages of North Goa is the "second home" of a Delhi or NCR  resident. With the "first home" city seeing a massive spike in Corona virus cases, Goa can ignore this at its own peril. The COVID surge in Delhi has been labeled the worst in the world. According to data available in the public space Delhi's present seven-day average of daily new cases is  over seven thousand odd which is far greater than  what New York  at 5,291 and Sao Paulo 3217 recorded during their peaks. Numbers that is quite disquieting to put it mildly. Now Goa seems to have some semblance of control over its covid problem. Goa has recently experienced days when there has been no deaths due to the virus. Goa is also a very important tourist destination centre attracting tourists from all over the country notably Delhi. This year with the virus still running riot in various parts of the world, the international tourists may be very few and far in between. It is also predicted by those who track the industry closely that the domestic tourist will come in large numbers. Doesn't it then make sense for Goa to restart stringent checks and even have new sops atleast for arrivals from Delhi? Dr Shekhar Salkar felt it made no sense to keep depending on the government when the people were depending the way they did. He said “People don’t seem to understand the importance of wearing a mask, maintaining social distancing and sanitizing. I am concerned about the people already here. They seem to be attending weddings, sitting together without a care. Tourists go to the beaches and are extremely unlikely to catch the virus. Even marriages held outside are ok. Those however conducted in halls are dangerous. No one seems to listen. The government should instruct its health officers to inspect these places.  With regards to testing people from Delhi, why I ask, we have been open for a month, tourists did not spread anything.  Wear mask, mask, mask. That will help prevent it from spreading. That will happen only if people change their behavior.” Dr Lloyd Sousa from Calangute however felt it was common sense to initiate testing for anyone coming in from Delhi or for that matter anyone coming from the north. He said “The situation is bad all over and in Goa, we are behaving like we are immune. The data shows it is dropping. The problem is we are not testing. And we can see that sops are not being implemented. Calangute is packed with tourists and we have stopped contact tracing, which is why we are getting less cases. We are not testing the guests coming into Goa and that is a big problem and that needs to be rectified immediately.” Dinesh Sinari a builder however felt it was not feasible since so many people were coming from all over by trains, cars and planes and it would be difficult to do anything. He however felt not wearing masks should invite punitive fines. Ajoy Gramopadhye another businessman felt it would make sense to initiate some sort of testing since the number of cases in Delhi had increased so much. Goa, he felt had a degree of control which was good news , he however wondered how would it be possible to have separate testing sites for people coming in from Delhi at various entry points. Jennifer Luis Kamat President FSAI (Goa chapter) felt it was important to initiate tests in Delhi itself of all the passengers flying into Goa. This she said was important to ensure, there was no rise in the number of cases as before. Ordinary Goans when asked were clear in their responses. Agnelo Dsouza who is employed in a private sector company said it did not make sense and it would not help. He said “  Cases are rising everywhere, either they aren't being reported or there's less testing. Delhi has increased testing hence more cases observed. There should be better SOPs and testing facilities in Goa rather. Testing should be further encouraged in Goa”. Point to be noted and Valerie Carvalho and employee in the private sector said “Looking at the no. of vehicles plying on the roads here in Goa - vehicles over packed, low usage of masks, YES!  It is high time the Goa government restarts stringent checks at the border - not only for Delhi arrivals, but for all those entering the state”. One can only hope the authorities are listening to the people.